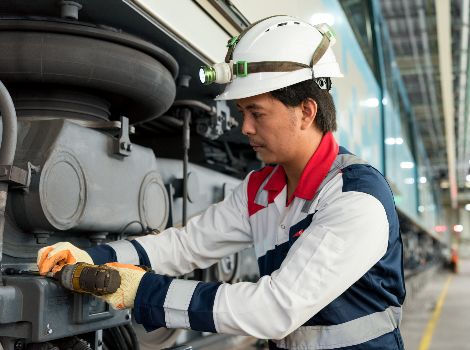 As part of its commitment to ensuring the safety and security of daily riders, Dubai’s Roads and Transport Authority (RTA) is undertaking a periodic rolling stock overhaul programme. The programme is run in collaboration with Keolis-MHI, the operator of the Dubai Metro and Tram at the highest standards of the industry. The overhaul procedures are conducted as per the recommendations of the Original Equipment Manufacturer of the metro.

“Trains are classified as the most critical and sensitive in terms of maintenance amongst all other public transport means. This is attributed to the need of carrying out all types of maintenance on trains based on well-rehearsed plans implemented regularly to ensure the highest safety and security of the train’s operating system as a whole. Such programmes will ensure the security and safe mobility of riders,” said Mohammed Al-Amiri, Director of Maintenance, Rail Agency, RTA.

“The Rail Maintenance Department performs two types of maintenance programmes: light maintenance, which is carried out every 14 days or quarterly, as well as heavy maintenance that includes train overhauls, is carried out in proportion to the train running mileage. Overhaul LV2 is the highest level of an overhaul, which includes the overhauling of each sub-system within the trains, this includes the Bogie, Gear Unit, Traction Motors, Journal Bearing, Tread Brake Unit, Train Doors, Ventilation Systems and Pneumatic Valves. A dedicated and highly skilled team of 85 technical employees including Technicians, Team Leaders and Engineers are tasked to carry out the train overhaul programme, which is working in 3 shifts 24/7 to accomplish the activity. Each train takes around 15 days to complete the overhaul activity and a total of 348,324 manhours have been deployed to complete the overhaul of 74 trains so far,” said Al Ameeri.

The first overhaul of the Rolling Stock was carried out from 2015 to 2019. The Second Overhaul program (Overhaul LV2) for the trains commenced in January 2020 and will be completed by Q2 2023.