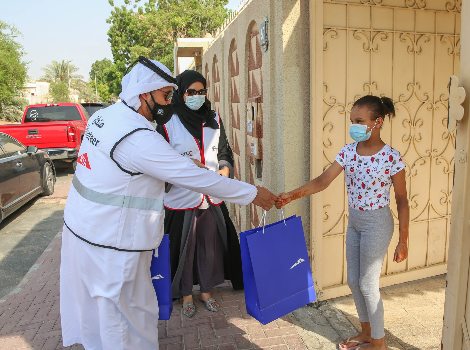 Roads and Transport Authority (RTA) announced that 2,152,214 persons abroad, in the UAE or within RTA itself, had benefited from 28 RTA’s corporate social responsibility (CSR) initiatives in 2020. The number reflects RTA’s commitment to shoulder its social, humanitarian and charitable commitments to community members in need everywhere.

Rowdah Al Mehrizi, Director of Marketing and Corporate Communication, Corporate Administrative Support Services Sector, RTA reiterated that RTA’s humanitarian efforts were driven by inherent ethical values that, projects and corporate practices. “RTA is keen to make an effective response to our government’s directives to lend support and aid to persons in need, regardless of race, belief or geographical locations,” she noted.

“RTA’s role in supporting the community was clearly illustrated during the Covid-19 pandemic where about 2,010,350 riders benefited from its initiatives. Supported by 22 volunteers from the RTA, volunteers distributed 180,000 posters about precautionary measures to all public transport means. 10,000 face masks were provided to the Dubai Health Authority (DHA) for distribution to medical personnel in the first defence line in recognition of their heroic efforts in tackling the virus.

“200 students benefited from the Home Education Environment initiative. RTA supported fixed-income groups by providing desks, seats and shelves for school books as well as writing boards, sports equipment, drawing tools and educative posters as part of efforts to emulate the school environment in the home-learning process. It also retrofitted 150 computers and electronics for handing over to Dubai Cares Foundation for distribution to students in need overseas,” explained Al Mehrizi.

RTA’s CSR efforts were in full gear last year. It donated six million dirhams to the iconic humanitarian facility, Dr. Magdi Yaqoob Hospital, as part of celebrations of ‘Hope Makers’ last February. This new facility will treat thousands of cardio patients from Egypt and other countries. RTA celebrated the International Workers Day by distributing 150 nol cards to workers in RTA’s projects to assist them with their needs during Ramadan in appreciation of their immense efforts under Covid-19 circumstances. It also distributed goodies to 500 orphan children of fixed income families during Eid Al-Adha, thanks to the efforts of the UAE Red Crescent Authority, Serco (Dubai Metro and Tram operator), Emaar Properties, Talabat and Dar Al Hai Tailoring. Distributed Items included free nol cards, national dress and Eid supplies.

The past edition of ‘Meals on Wheels’ initiative was instrumental in supporting the first defence-liners in collaboration with Serco and Talabat. 13,500 Ramadan Iftars were distributed to cleaning and security staffs at Latifa Hospital, Rashid Hospital and Dubai Corporation for Ambulance Services who made dedicated efforts under precarious health conditions. RTA coordinated with the Dubai Taxi Corporation (DTC) in distributing Ramadan supplies to 200 taxi drivers who have families in the UAE. Likewise, the RTA Women Committee distributed Ramadan supplies along with prepaid nol cards to 210 female taxi drivers to alleviate their financial burden and show appreciation of their valued efforts during the pandemic. Dubai Taxi Corporation (DTC) also distributed 4,800 daily iftars at worker quarters of Muhaisna, Al Quoz and Jebel Ali,” explained Al Mehrizi.

“RTA always seeks to play an active role in initiatives and events held in Dubai or the UAE. It supported the initiative of Her Highness Shaikha Hind bint Maktoum bin Juma Al Maktoum, wife of His Highness Sheikh Mohammed bin Rashid Al Maktoum, Vice-President, Prime Minister of the UAE, Ruler of Dubai, Chairwoman of the Food Bank, to provide 10 Million Meals campaign. RTA deployed 30 taxis to deliver 20,000 Ramadan supplies to individuals in collaboration with the International Charity Organization and Al Futtaim Company. It also took part in celebrations of Zayed Humanitarian Day by distributing 200 nol cards to senior citizens at Hatta to help them with their needs during Ramadan in collaboration with the Community Development Authority (CDA) and the Dubai Taxi Corporation(DTC),” noted Al Mehrizi.

“RTA’s extensive support also covered cultural and knowledge activities through supporting Emirates Airline Festival of Literature by lifting guests and visitors of the Festival. About 3,500 participants benefited from this initiative. It also supported ‘Read with RTA’ app by providing 600 online audiobooks and articles to promote the culture of reading among public transport riders, who just need to scan QR codes in their transit means. RTA also assisted in the field of licensing by granting free driving licenses to 25 unprivileged persons in conjunction with the Emirates Driving Institute and the support of Bait Al Khair Society, which nominated beneficiaries,” she elaborated.

“RTA’s Charity Foundation, which was established to mark the UAE’s initiative dedicating 2017 as The Year of Giving, continued its humanitarian mission by giving at all fronts. It helped 100 employees through the ‘Charity Bridge’ initiative designed to assist those experiencing tough living conditions in collaboration with Bait Al Khair Society, which sets the criteria of merit. An amount of AED 1000,000 (One Million UAE dirhams) was donated, including AED150,000 (One Hundred & Fifty Thousand UAE Dirhams) contributed by employees.

“RTA is always keen to take part in national and international events out of its corporate social responsibility. In this regard, it celebrates the UAE Flag Day and Commemoration Day every year with the participation of the Director-General, Chairman of the Board of Executive Directors as well as CEOs and Directors of RTA. It runs an internal digital campaign through the intranet and extranet to use the state flag in decorating key roads and infrastructures such as the Shaikh Zayed Road, Dubai Water Canal, Al Garhoud Bridge, Business Bay Crossing, Tripoli Street, World Trade Centre R/A, Zabeel St, and the Tolerance Bridge. RTA made congratulatory messages through smart screens across Dubai marking the UAE 49th National Day. RTA celebrated the World Arabic Language Day with the participation of His Excellency the Director-General and His Excellency Mohammed Al Mur. It also supported the International Day for Tolerance in coordination with the Ministry of Tolerance. In this regard, it sent messages via smart screens fostering the spirit of coexistence, reciprocal respect and sending good wishes to employees of different nationalities on their national events.

“RTA also celebrated the International Volunteer Day where it hosted individuals who contributed to community work such as Khalifa Baqir, Senior Advisor, General Secretariat of the Dubai Executive Council, Chairperson of Command and Control Centre for Combating Covid-19, and Ahmed Nazr Al Falasi, winner of Arab Hope Makers Award 2020 and Founder of Ahmed Al Falasi Foundation for Humanitarian and Charitable Initiatives. The event witnessed the launch of RTA’s rejuvenated internal volunteers’ platform, which offers numerous benefits to volunteers such as registering their achievements and careers and briefing them on the latest developments of RTA’s volunteering activities. RTA also paid tribute to its volunteers who contributed 559 volunteering hours that assisted in the success of our volunteering activities and initiatives.

“RTA made several CSR successes such as winning the Dubai Chamber of Commerce CSR Label for the third year in a row, thus becoming the first government entity to make this achievement. It also won ISO 26000 for compliance with Social Responsibility Standards. RTA’s new corporate identity clinched three gold awards and one bronze award. RTA is keen on making partnerships with various entities to promote their social role. It has a comprehensive CSR strategy that covers all community segments including students, people of determination, senior citizens and others driven by its conception of humanitarian works,” concluded the Director of Marketing and Corporate Communication.