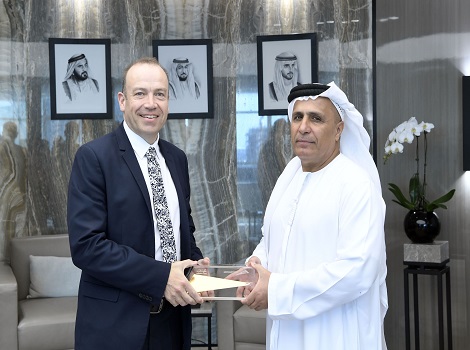 His Excellency Mattar Mohammed Al Tayer, Director-General and Chairman of the Board of Executive Directors of Roads and Transport Authority (RTA); and His Excellency Chris Heaton-Harris, Minister of State at the Department for Transport, UK, witnessed the signing of a cooperation agreement between RTA and BeemCar Ltd; one of the biggest developers of sky pods in the world. The signing of this agreement would step up cooperation in developing futuristic mobility solutions through sky pods built on suspended transport technology. They are characterised by speed, safety and the efficient use of resources.

Abdul Mohsen Ibrahim Younes, CEO of Rail Agency, signed for RTA; and Robin Brownsell, CEO of BeemCar Ltd, signed on behalf of the company. Attendees of the signing included His Excellency Andrew Jackson, the British Consul-General in Dubai, and several directors of RTA.

According to the agreement, the company will develop sky pods; a futuristic urban mobility system in Dubai. The operation of such units occupies land area several times less than conventional means of the same capacity. They are also power-efficient, small in size and light in weight, and mounted with steel wheels that run on suspended rails.

“The signing of the agreement is part of RTA’s efforts to deploy autonomous transit means in line with the Dubai Self-Driving Transport Strategy aimed at diverting 25% of total mobility journeys in Dubai to autonomous transit means by 2030. The move corresponds to RTA’s efforts to enhance the integration of mass transit modes, and offer a solution to the first and last-mile challenge; which helps riders reach their final destinations,” said Al Tayer.

Al Tayer welcomed the British Minister of State at the Department for Transport His Excellency Chris Heaton-Harris and praised the partnership between RTA and the British companies and organisations in the field of transportation and transport systems.

Al Tayer and the British Minister discussed means of boosting relationships and sharing expertise between RTA and its counterpart in the UK in the field of rail operation, self-driving transport and control systems. The Minister was also briefed about RTA plans in these fields.

He acquainted the British delegation with RTA’s trials on the autonomous air taxi along with its operational requirements including rules and policies, coordination with federal and local aviation authorities as regards legislations governing air corridors, design and locations of take-off and landing points, and safety standards.

The visiting minister was also briefed about RTA’s soft mobility project for developing an integrated and friendly environment using unconventional transit means like walking, cycling and e-scooter besides addressing the first and last-mile challenges. He also reviewed RTA’s efforts in building cycling lanes extending 425 km; which are expected to rise to 674 km by 2023.

His Excellency Chris Heaton-Harris hailed the massive infrastructure of public transport in Dubai and the high operational efficiency of the Dubai Metro highlighted by punctual service timings. He was delighted to see several British entities engaged in RTA projects adding that he would be looking forward to more cooperation and stepping up the exchange of expertise in the interest of both parties.

“I am very pleased to attend the signing of a Memorandum of Understanding between Dubai’s Road and Transport Authority and BeemCar UK. This exciting collaboration will evaluate the feasibility of an aerial transit system based on BeemCar’s unique expertise. This is another example of the UK’s continued commitment to forging partnerships with the UAE across a broad range of innovation and technology, said Harris.