RTA reviews achievements of Women Committee in 2020, plan for 2021


(Moaza: Emirati women set a model for rising to challenges and making achievements) 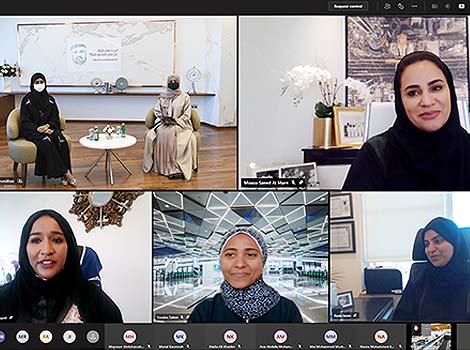 The Women Committee at the Roads and Transport Authority (RTA) has held a remote gathering in celebration of International Women’s Day 2021 (March 8th). The meeting discussed the achievements of RTA’s female employees in 2020 and the plan for 2021. During the gathering, an interview was broadcasted with an outstanding female employee, and female ambassadors of RTA’s Women Committee were announced besides honouring RTA’s women sports team for their efforts in 2020.

“Women in the UAE, especially female employees, proved their abilities to rise to the challenges and make achievements in 2020, which posed a massive challenge to the whole world. The exceptional circumstances forced by the outbreak of Covid-19 brought in extra restrictions to women in their personal, family and professional life. Once again Emirati women proved their merit in the handling of extremely complicated situations,” added Al Marri.

“In 2020, RTA female employees have set an example in professional, social and sports activities. RTA’s Women Committee exhibited resilience and agility in handling challenges and made sustained efforts that resulted in holding 40 leisure, social and sports events last year. The committee won 26 sports medals, rolled out several initiatives, and held an open house for female staff.

The gathering discussed the highlights of RTA’s Women Committee Plan 2021, which are focused on empowering women and working mothers to ensure a balance between personal and family life. The plan stresses career progression through training courses in a variety of speciality fields relating to personal skills as well as psychological and physical health.

“Women constitute 23% of the total workforce of the RTA. They fill 19% of leading jobs, 54% of specialist and intermediate management jobs, and 40% of other job categories. These figures illustrate the successful initiatives of RTA’s senior management and the efforts of RTA’s Women Committee to support females employees. We will continue the progression and empowerment of female staffs to build the nation and showcase their roles at local and global events,” concluded Al Marri.

At the end of the gathering, 17 members of the women sports team were honoured for their achievements and representation of the RTA in several sports events. The team won Sheikha Hind Women Sports Table Tennis Tournament and achieved fine results in the Dubai Women's Triathlon 2020. RTA won the first two places in the Open Super Sprint Race and finished third in the female citizen version of the Super Sprint Race.