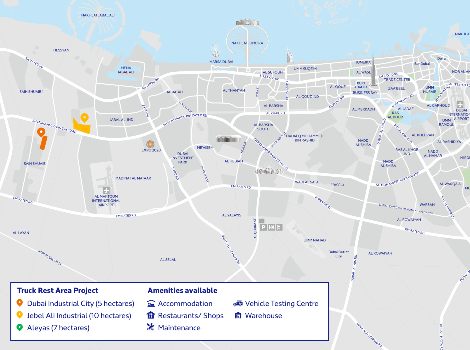 Dubai’s Roads and Transport Authority (RTA) has released a tender for constructing three integrated truck rest stops in Dubai. The project offers an innovative model of Public-Private Partnership (PPP) aligned with the provisions of Law No (22) for 2015 governing PPP in Dubai. These rest stops will be situated in vital spots. The first is on Sheikh Mohammed bin Zayed Road nearby Jebel Ali Industrial Area 3 in the direction of Abu Dhabi. The second is on Emirates Road, near the entry of Sharjah. The third is in Dubai Industrial City nearby Sheikh Mohammed bin Zayed Road.

Explaining the project features, His Excellency Mattar Mohammed Al Tayer, Director-General, Chairman of the Board of Executive Directors of the Roads and Transport Authority, said: “The project will be undertaken in partnership with the private sector based on Build-Operate-Transfer (BOT) model in a contract that runs 25 to 30 years. Through this project, RTA offers private entrepreneurs a long-term investment opportunity to add innovative and smart services and diversify their sources of income, which serves the key objectives of the PPP. Local and global firms are invited to tender their financial and technical proposals.”

“The first site, which is near Jebel Ali Industrial Area 3 in the direction of Abu Dhabi covers an area of 100 thousand square metres and accommodates 170 to 200 trucks. The second site adjacent to Emirates Road and Sharjah entry point, spans 70 thousand square metres and will accommodate 130-150 trucks. The third site is planned at Dubai Industrial City nearby the Sheikh Mohammed bin Zayed Road over an area of 50 thousand square metres with a capacity to take 90-100 trucks. The three rest-stops will have integrated services that meet all the basic and daily needs of heavy vehicle drivers such as specialist technical testing centres, truck service centres, warehouses, restaurants, outlets and rest areas,” continued RTA Director-General, Chairman of the Board of Executive Directors.

“RTA had set out plans to build permanent and temporary rest-stops for heavy vehicles to eliminate issues of parking the vehicles on the sides of highways and residential areas and meet the rising demand for these rest-stops. Currently, heavy vehicles make about 375 thousand journeys through Dubai, lifting about 5 million tons of cargo every day. These rest stops will enhance the traffic safety level and reduce the number of incidents caused by exhausted drivers sitting behind the wheels for extended hours. They will also ease the movement of trucks during the prohibited timing by finding a place to park them until the elapse of the prohibited timings.

“By releasing this project to tender, RTA seeks to engage the private sector in carrying infrastructure projects and the delivery of services. The investment opportunity on offer contributes to stimulating the economic activities in Dubai and achieving mutual benefits that enable investors to realise feasible financial returns. The private sector will thus continue to improve the infrastructure of roads and transport and support the leading role of Dubai serving this vital economic sector. The project will also improve the quality of public services, transfer knowledge and expertise from the private sector to the public sector, and qualify employees of government entities in managing and overseeing this sort of long-term investment projects,” elaborated Al Tayer.

“RTA attaches top priority to the logistic transport sector as it is a key driver of the economic activities and supports the Dubai Silk Road initiative. In conjunction with the concerned bodies, RTA has commissioned a comprehensive study of trucks movement in Dubai encompassing site surveys, interviews, workshops and technical analyses. The finding of this study identified the required sites for constructing truck rest stops and developed a model for analysing the traffic and financial impacts of the timings and routes of truck ban policies. RTA also conducted an assessment of various engineering and traffic solutions and examined the organisational and structural aspects of managing the movement of trucks and goods in Dubai,” concluded Al Tayer.