(The two entities announced the formation of the Lifeline Team) 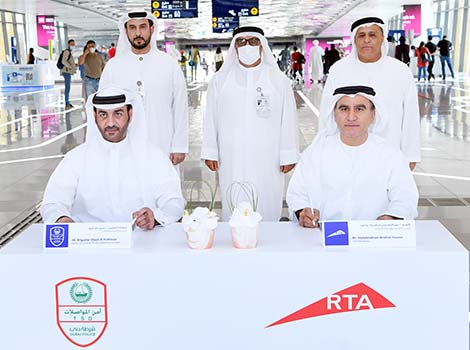 His Excellency Lieutenant General Dhahi Khalfan Tamim, Deputy Chairman of Police and General Security in Dubai, His Excellency Mattar Mohammed Al Tayer, – Director General, Chairman of the Board of Executive Directors of the Roads and Transport Authority (RTA), and His Excellency Major General Awad Hader Al Muhairi, Deputy Director General of the State Security Department in Dubai attended the signing of Memorandum of Understanding (MoU) to protect and ensure the safety of the transport sector and its users. The two parties announced the establishment of a Lifeline Team to cater to the security of transport.

The signing of the agreement signals the commitment of the two parties to make consolidated efforts towards protecting and ensuring the safety of transport, riders and related facilities in the emirate. The MoU calls for sustained improvements of procedures in place to set up the security, safety and flow of transit means across Dubai. It also calls for sharing information regarding potential risks facing the transport riders and facilities, streamlining processes and coordinating emergency drills. The MoU stresses on supporting bilateral communication in the public interest, accelerating the exchange of information between the two operation rooms, and implementing the best global practices of the transport industry.

According to the MoU, the Transportation Security Department is to ensure a high level of security and safety for transport riders and facilities, apply top international practices and technologies, and identify and analyse the risks to which transportation is exposed. The department has to provide the required security support during hazards to maintain the safety of the sector. It shall also develop plans to address the basic needs and tackle incidents, disasters, and potential threats; besides developing standards and specifications of transportation security and ensuring, they are implemented and updated periodically. The department shall identify the security needs to be addressed in facilities of future projects, attract and qualify national talents, conduct joint training and drills as needed, and coordinate with the local and federal government entities as well as foreign entities and international authorities.

According to the MoU, RTA shall inform Dubai Police of all requirements that may assist the Dubai Police to carry out its duties, including the link with the existing electronic and smart devices. RTA shall also supply the department with the layouts of transport means and facilities, affiliated entities including those under planning to develop appropriate security and protection plans.

During the signing of the MoU, an announcement was made to establish joint security committees, which include the Lifeline Transport Security Committee. The committee oversees the strategic plans, examines risks to which the sector is exposed, and endorse the final decisions relating to security projects and plans to be undertaken. It will also develop suitable solutions to the security challenges of the transport sector. There are four sub-committees: Strategy and Assessment Committee, Operations and Security Training Committee, Emergency Security Situation Committee, and Future Projects Committee.

His Excellency Lieutenant General Dhahi Khalfan Tamim - Deputy Chairman of Police and General Security in Dubai praised the signing of the MoU, which would enhance the cooperation between the two parties. “This MoU builds on the earlier MoU relating to the security of public transport means used by hundreds of thousands every day. The continued coordination between the two sides contributed to higher security and safety of riders and facilities of transportation means. We are keen on providing top training to individuals to cope with all emergency cases, and all modern security means needed by the sector,” added Tamim.

His Excellency Mattar Mohammed Al Tayer, Director General, Chairman of the Board of Executive Directors of Roads and Transport Authority thanked the General HQ of Dubai Police under the commandment of His Excellency Lieutenant General Dhahi Khalfan Tamim, Deputy Chairman of Police and General Security in Dubai, His Excellency Lieutenant General Abdullah Khalifa Al Marri, Commander-in-Chief of Dubai Police, and His Excellency Major General Talal Hamid Belhoul Al Falasi, Director General of the State Security Department in Dubai for the huge support of RTA’s efforts to ensure the safety and security of public transport means. He noted that such cooperation had reflected positively on public transport riders.

“Dubai’s integrated public transport means have now become the backbone of people’s mobility around Dubai. RTA is committed to the safety and convenience of riders at all times and seeks to improve the level of service align it with the top international standards,” added Al Tayer.

His Excellency Major General Awad Hader Al Muhairi, Deputy Director General of the State Security Department in Dubai commended the partnership and security strategies between Transportation Security Department and RTA. “The signing of this MoU is a further step towards boosting the corporate relationships of the two parties, which will enhance the security strategies and sustain the development of the public transport network. It will also consolidate the joint efforts and capabilities to improve the security service in the Emirate. The continued support of RTA contributed to the security and safety of public transport means, riders and facilities, which serves in the interest of Dubai’s community.”