(Al Tayer: We are keen to streamline the operation of the sector, ensure the delivery of excellent services to the public) 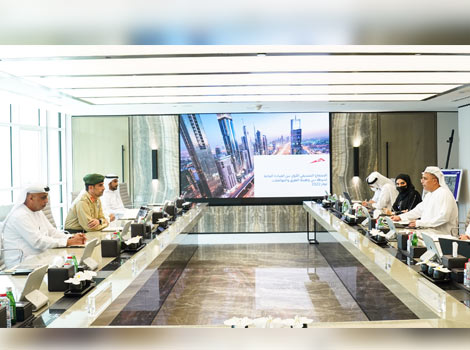 His Excellency Mattar Al Tayer, Director-General, Chairman of the Board of Executive Directors of the Roads and Transport Authority (RTA), and His Excellency Lieutenant General Abdullah Khalifa Al Marri, Commander-in-Chief of Dubai Police held a coordinative meeting to discuss the traffic safety issues related to the use of motorbikes in the delivery sector. The discussions looked into the means of realising the strategic performance indicators and the targets of Dubai Traffic Safety Strategy along with RTA’s strategy for handling the demand for transport.

At the start of the meeting, which was held in RTA’s Head Office, Al Tayer welcomed His Excellency Lieutenant General Abdullah Khalifa Al Marri and the accompanying delegation. He hailed the strategic partnership between RTA and Dubai Police and commended the role of coordinative meetings held in boosting cooperation and joint efforts. “Such cooperation contributed to achieving the targets of Dubai Traffic Safety Strategy in terms of reducing traffic accident fatalities, and increasing the ridership of public transport means as well as the individual mobility means for the benefit of citizens, residents and visitors of Dubai,” commented Al Tayer.

“RTA attaches paramount importance to traffic safety and is committed to implementing Dubai Traffic Safety Strategy and its zero-fatality vision such that Dubai will be the best city in the world in traffic safety. We are keen to streamline the business of the delivery sector to ensure its growth in an environment that caters to safety and security concerns. We are also keen on improving the traffic safety level of motorbike riders and road users, and serving the interests of all stakeholders. The Covid-19 pandemic resulted in a surge of demand for delivery service companies to meet the public needs of goods and products, which dictated the need to regulate the business of this sector to ensure delivering quality services to customers,” said Al Tayer.

His Excellency Lieutenant General Abdullah Khalifa Al Marri praised the strategic partnership between the General HQ of the Dubai Police and the Roads and Transport Authority. He noted that such partnership contributed to improved joint efforts that resulted in enhanced safety, security and traffic safety besides stepping up the overall security of Dubai roads.

His Excellency Al Marri hailed the efforts of joint awareness teams which had yielded positive results. He added that such campaigns had achieved their targets in coaxing an improvement in the conduct of road users by engaging them in assuming responsibility and ensuring the concerted efforts of the community members towards serving the public interest.

The meeting discussed the scope of delivery service  using motorbikes, an activity that has grown considerably over the past few years and become more important during the Covid-19 period. Consequently, the number of accidents involving motorbikes soared by 25% from 300 accidents in 2020 to 400 accidents in 2021. Reasons for accidents are attributed to the lack of leaving safety distance, sudden swerving and jumping the red signal.

The two parties discussed the roadmap and outreach campaigns to step up the traffic safety level of this activity and examined the quality regulation applicable to motorcycles and their drivers. Measures taken included the introduction of specifications of protective gear for motorbike riders , which include elbow protectors, helmets and safety shoes matching the international standards and specifications. Measures called for preparing the training material for motorbike riders operating in this activity in cooperation with training institutes. The Delivery Service Excellence Award  is being launched to reward the best-performing companies and drivers.

The two parties announced the launch of large-scale joint campaigns to educate motorbike riders working for delivery companies about the risks of over speeding and the negative driving practices. The campaigns will witness enhanced traffic law enforcement measures on delivery drivers to curb their malpractices and enhance their compliance with the traffic rules. Measures of licensing such drivers will also be more stringent.

Companies and drivers will be introduced to the Excellence Awards in the sector covering two categories. The first category covers the best two companies in delivery service, and the best two companies in delivery service via smart platforms and apps. The second category is dedicated to the best professional drivers where the top 10 drivers will be honoured each year. The award creates a competitive environment between delivery companies that prompts them to improve customer service quality and motivate drivers to abide by the traffic regulations and customers’ service.