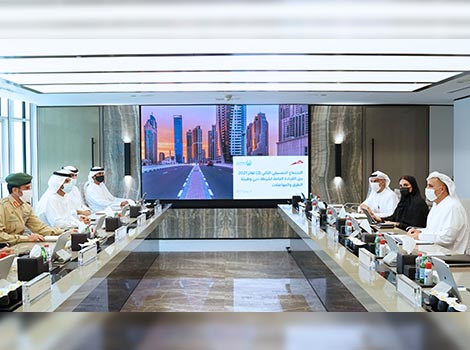 His Excellency Mattar Mohammed Al Tayer, Director-General, Chairman of the Board of Executive Directors of the Roads and Transport Authority (RTA), and His Excellency Lieutenant General Abdullah Khalifa Al Marri, Commander-in-Chief of Dubai Police, held a coordinative meeting to discuss issues of common concern. Discussions covered coordination between the two parties in the fields of transport security, traffic safety and the achievement of the strategic performance indicators along with the targets of the Dubai Traffic Safety Strategy 2017-2021.

The meeting, which took place at RTA’s Head Office, had discussed the latest developments related to the proposed regulatory model for operating E-Scooters, and Moped together with RTA’s street lighting plan in various Dubai districts 2022-2025.

At the outset of the meeting, Al Tayer welcomed His Excellency Lieutenant General Abdullah Khalifa Al Marri and praised the strategic partnership between the RTA and Dubai Police. He also hailed the contribution of coordinative meetings to leveraging the cooperation and realising the objectives of the Dubai Traffic Safety Strategy i.e. reducing traffic incidents. They also examined the security and safety strategy aboard transit means in the interest of citizens, residents and visitors of Dubai.

His Excellency Lieutenant General Abdullah Khalifa Al Marri praised the strategic relationship between the General HQ of Dubai Police and RTA aimed at achieving Dubai’s ambitions to deliver excellent delivering pioneering services and solutions at the highest global standards in the fields of roads, transport and related security. He stressed that such coordinative meetings between the two entities aimed to step up the level of cooperation and work in a team spirit towards bringing happiness to people and boosting the public security and traffic safety in the Emirate.

The meeting reviewed the results of the trial operation of the E-Scooter rolled out in October 2020. Currently, there are about 800 E-Scooters in operation within five key Dubai districts namely: The Mohammed bin Rashid Boulevard, Jumeirah Lakes, Dubai Internet City, Al Riqqa & Al Muraqqabat, and the 2nd of December Street (designated lanes and range). It was reported that the experimental deployment of E-Scooters proved successful and befitting to short-journey individual mobility as well as the first and last-mile journeys. The satisfaction rating of the experiment reached 82%.

The meeting discussed preparations for the permanent operation of E-Scooters across the Emirate upon the completion of the trials. Aspects reviewed included selecting the best model that suits Dubai and benefiting from the deliverables of the trial run phase as well as the expertise of major cities in this regard. The meeting discussed benchmark of operating of E-Scooters in a host of metropolitan cities like London, Paris, New York, Berlin and Singapore.

The study highlighted the different objectives underlying the operation of E-Scooters in those cities such as easing congestion or providing new mobility means.

Discussions also covered the preparedness of the infrastructure and the public awareness of this new mobility means. Attendees looked into the key elements of regulating the operation of the shared and personalised E-Scooter to be introduced shortly. Discussions focused on four key elements: the user, the E-Scooter, the road, and the commercial model to be provided by operators. The meeting also discussed the districts proposed for the upcoming trial run in October 2021.

The meeting examined a proposal to regulate the operation of the lightweight pedalled motorbike known as Moped. It is fitted with two or three wheels powered by a motor designed to travel at a speed not exceeding 50 km/h. It differs from the regular motorbike in terms of engine power and speed. Some cosmopolitan cities started to license mopeds as a first and last-mile mobility option but under specific conditions and within certain areas to ensure the safety of riders and road users.

The meeting reviewed the benchmarks related to the conditions and controls governing the use of mopeds in advanced countries such as the USA, Spain, Italy and France. The discussion also covered the proposed regulation to govern the use of moped in Dubai including the age of the user, permitted streets, maximum engine power, registration & licensing, and the maximum speed among others.