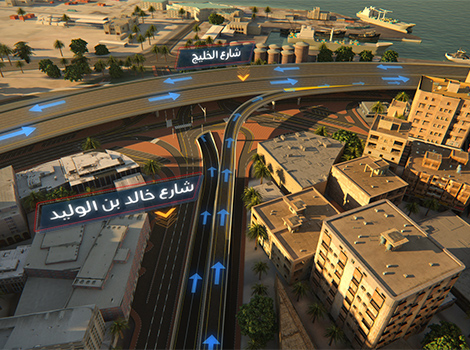 In implementation of the directives of His Highness Sheikh Mohammed bin Rashid Al Maktoum, Vice-President and Prime Minister of the UAE and Ruler of Dubai, to improve Al Shandagha Roads Corridor to cope with the sustained urbanisation of the locality, RTA awarded a contract for upgrading the Falcon Junction. The project, which is bordered by Al Khaleej, Khaled bin Al Waleed and Al Ghubaiba Streets, will cost about AED450 million. Upon completion, it will link with Shandagha Bridge (Infinity) Northwards.

“The project includes the construction of two bridges along Al Khaleej Street. The first bridge extends 750 m Northwards, and the second stretches 1075 m Southwards; comprising of 6 lanes in each direction with a capacity of 12,000 vehicles per hour per direction.

Due to the massive scope of Al Shandagha Corridor Project, which has a cost tag of 5.35 billion dirham, it had been split into five phases, two had so far been completed.  Works completed covered upgrading the junction of the Sheikh Rashid-Oud Metha Streets junction (Wafi Junction), and the intersection of the Sheikh Rashid-Sheikh Khalifa bin Zayed Streets; which included the construction of two bridges on the Sheikh Khalifa bin Zayed Street comprising of two lanes in each direction. It also included the construction of a one-lane bridge from Zabeel Street in the direction of Sheikh Rashid Street and a tunnel on the Sheikh Rashid Street in the direction of Al Mankhool Junction comprising four lanes in each direction.

Work is currently underway in Phase III; which includes six contracts covering the construction of Al Shandagha (Infinity) Bridge featuring an iconic architectural design that will be a unique landmark for Dubai worldwide together with a slip road at Bur Dubai and bridges linking with Al Shandagha Tunnel.

Works include improvements on the Corniche Street, junctions of Al Khaleej Street, the Falcon Junction as well as entry/exit points of Deira Islands at Abu Baker Al Siddique Street. Bridges extend 8.5 km, tunnels span 500 m, and surface roads extend 8 km in total. The Project, which involves the construction of 10 surface junctions, will be completed by the end of 2022.

Phase IV of the Project covers improvements of Al Khaleej Street along with its intersection with Abu Hail Street, and the improvement of the junction of Sheikh Rashid with Jumeirah, Al Mina and Al Mankhool Streets. Works require the construction of bridges stretching 3.4 km, tunnels extending 2.25 km, six surface junctions, and roads extending 5.1 km. This Phase is expected to be completed by 2025. Phase V covers the construction of Southwards bridges leading to Deira extending 1.5 km, which are set for completion by 2027.