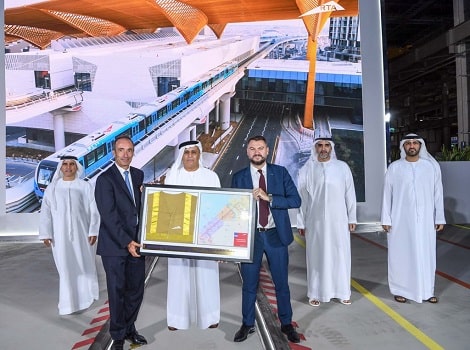 Dubai’s Roads and Transport Authority (RTA) announced that Keolis MHI Rail Management and Operation LLC had taken over the responsibility of operating and maintaining Dubai Metro as well as the operation of Dubai Tram from Serco Middle East. The handing/taking over coincided with the 12th anniversary of Dubai Metro, which started operation on 09/09/2009. Since then, the metro services recorded highly successful global indicators in terms of safety and operational efficiency as reflected in trips punctuality of 99.7% and ridership of more than 1.706 billion passengers until the end of last August.

During the event, His Excellency Mattar Mohammed Al Tayer honoured Brigadier Al Hathboor and Colonel Mohammed Al Abbar, Deputy Director of Transport Security at the Dubai Police for the efforts of the Department in maintaining the security and safety of various mass transit means. He also Awarded Phil Malem and several officials of Serco Group in recognition of their efforts in running the operation and maintenance works of Dubai Metro over the past years.

“Undertaken under the directives of His Highness Sheikh Mohammed bin Rashid Al Maktoum, Vice-President, Prime Minister of the UAE, Ruler of Dubai, Dubai Metro currently constitutes the backbone of transportation systems in Dubai. It links vital areas and provides safe and smooth mobility for riders. The huge successes of Dubai Metro have gone far and wide beyond the scope of the Emirate. The metro has embellished the global profile of Dubai as a superior business hub and a key destination for an exceptional quality of life. The metro is a brilliant addition to Dubai’s iconic landmarks as it uses state-of-the-art rail technology,” said His Excellency Mattar Mohammed Al Tayer.
“Billed as the longest driverless metro project worldwide, Dubai Metro contributed to boosting the global competitiveness of Dubai and its success in hosting mega-events, such as Expo 2020 Dubai, which will be launched this October. The metro has also recorded high indicators in operational efficiency and trip punctuality that reached 99.7%. From the start of the passenger service in September 2009 up to the end of August 2021, the Dubai Metro operated more than three million trips transporting about 1.706 billion riders,” he commented.

“Dubai Metro has plenty of socio-economic as well as environmental benefits. It has appreciated the value of properties in some commercial districts around the metro stations by 20 to 30%. The cumulative benefits of the metro from 2009 up to the end of 2020 amounted to AED115 billion against cumulative capital and operational costs of AED45 billion. The cumulative benefits are expected to reach AED234 by 2030 against cumulative capital and operational costs of AED54 billion. The economic return from each dirham spent on the Dubai Metro reached AED2.5 in 2020 and is expected to rise to AED4.3 by 2030. The metro has also reduced the carbon emissions and eased the traffic congestion across the districts served by 15 to 25%. It has also contributed to enhancing the share of public transport means in people mobility three folds from 6% in 2006 to as much as 18.1% in 2019,” elaborated Al Tayer.

Al Tayer stressed the importance of maintaining the excellent performance indicators and high operational efficiency of the Dubai Metro in the foreseeable future, especially as the following month would see the launch of the biggest event ever hosted by the UAE i.e. Expo 2020 Dubai. He praised the contribution and efforts of the strategic partners whose efforts underlined the successful operation of the metro service. Al Tayer commended the efforts of the GHQ of Dubai Police represented by the General Department of Transport Security and Serco Middle East, which maintained a high operational efficiency of the Dubai Metro over the past 12 years. He wished every success to Keolis MHI Rail Management and Operation LLC.
Keolis Group CEO Marie-Ange Debon said: “We are very excited to begin operating Dubai’s world-class metro and tram networks in collaboration with MHI and MC. We’re also delighted to welcome 1,850 new staff members to Keolis Group. Our shared goals bring us together: meeting the highest safety standards, delivering outstanding passenger service, and moving together towards a smart and sustainable future.”

“Along the way, we’ll continue to focus on safety, quality, innovation and sustainability. Our ultimate goal is to ensure customer happiness by providing the very best passenger experience to Dubai’s residents and visitors. We share RTA’s Smart City Vision, which sees smart mobility as the answer to a more efficient transport system and a more vibrant city. And we look forward to accompanying RTA on this exciting journey to make the city safer, cleaner, and more attractive,” continued Debon.
Serco Middle East CEO Phil Malem said, “As a public services company, Serco’s purpose is to support the governments of the countries in which we work whilst providing world-class services and experiences to the residents that live there. We have done that with the Dubai Metro and Tram.
“Over the past 12 years, working hand in hand with the RTA, we have successfully launched, maintained and operated two of the region’s first rail transit systems. We are proud to have enabled over 200 million passenger journeys per annum with trains running at 99.7% punctuality.”

The operation and maintenance contract of Dubai Metro and Tram with Keolis-MHI LLC spans 15 years (9 base years and 6 years renewable every two years). During this period, the company shall undertake the operation and maintenance of the Dubai Metro Red and Green lines as well as the operation of the Dubai Tram. It will also run all assets of the metro and tram networks including trains, control centres, stations and the associated infrastructure. The company shall provide high-class passenger transport services compatible with the daily variations in the number of the metro and tram riders.
The contract also covers the operation and maintenance of the automated metro and fare systems including the selling and recharging of nol cards at the metro stations, providing senior, technical and administrative posts for Emiratis and training them on the work environment, and the continuous monitoring of the integrity as well as the improvement of the metro and tram systems. It shall also ensure the full coordination and integration of the metro, tram and other means of transport, provide the highest standards of security and safety for the metro and tram riders and achieve competitive performance indicators in the operation and punctuality of the operational timetables. During the preparatory period, the company carried out a smooth process for the gradual taking over of assets and systems together with the transfer of employees from Serco to its human resources.

Dubai’s metro and tram network spans about 100 km: 90 km on the Red and Green Lines as well as Route 2020, and a tram line stretching 10.6 km. The network has 64 stations: 53 on the metro lines and 11 on the tramway. There are 129 trains to serve the metro lines and 11 trains to serve the tramway. The total number of Dubai Metro and Tram riders is about 210 million riders per annum.