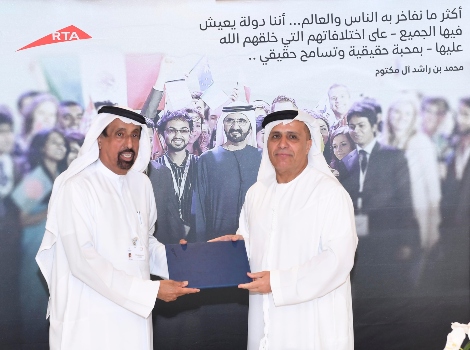 H.E Matar Al Tayer, Director General and Chairman of the Board of Executive Directors of Dubai’s Roads and Transports Authority (RTA), and H.E Dr Hamad Al Shaibani, Managing Director of International Institute for Tolerance (IIT), signed a partnership agreement for strengthening cooperation and exchanging experiences in support of the UAE’s initiative declaring 2019 as the Year of Tolerance. Several directors from both parties attended the signing of the agreement.

“The agreement epitomes the willingness of RTA to transform the values of tolerance into real-life practices. RTA will lend support to initiatives of the IIT such as the World Network for Tolerance “Decathlon of Tolerance”, Youth of Tolerance and Happiness and Future’s Forum. The agreement names RTA as a strategic partner for initiatives and activities of the IIT such as the World Tolerance Summit and Mohammed bin Rashid Al Maktoum Tolerance Award. RTA pledges support to make these initiatives a success,” said Al Tayer.

“The UAE is a universal model for tolerance and coexistence of people from multi nationalities, origins and religions advocated by His Highness Sheikh Khalifa bin Zayed Al Nahyan, President of the UAE; His Highness Sheikh Mohammed bin Rashid Al Maktoum, Vice President and Prime Minister of the UAE and Ruler of Dubai; and His Highness Sheikh Mohammed bin Zayed Al Nahyan, Crown Prince of Abu Dhabi and Deputy Supreme Commander of the UAE Armed Forces. More than 200 nationalities live in peace and happiness on the land of the UAE. They enjoy a life free of hatred, radicalism and discrimination in a country that criminalise such negative conducts between inhabitants. The establishment of the Ministry of Tolerance is a practical illustration of this concept. We believe that the signing of this agreement is a major step towards making Tolerance a corporate identity of RTA,” he added.

Dr. Hamad Al Shaibani extended his heartfelt thanks and appreciation to RTA for teaming up with IIT, which will contribute to achieving positive results. “The agreement supports IIT in projects focused on developing the human thought, showcasing the spirit of tolerance and coexistence, and empowering the true concept of a tolerant community. Such efforts are in line with the vision of His Highness Sheikh Mohammed bin Rashid Al Maktoum, Vice President and Prime Minister of the UAE and Ruler of Dubai, the arch supporter of a development model built on investing in humans,” said Al Shaibani.

“The implementation of this agreement will be the starting point of making efforts on the ground towards strengthening the values of tolerance and brotherhood. We perceive these values in the thinking of our leaders who always stress on shared human values of peace, tolerance, coexistence, dialogue, cultural diversity and acceptance of the other. Dedicating 2019 as the Year of Tolerance by His Highness Sheikh Khalifa bin Zayed Al Nahyan, President of the UAE, underscores the values of Tolerance in continuation of UAE founder the late Sheikh Zayed Bin Sultan Al Nahyan path,” he added.

Al Shaibani pointed out that IIT launched several initiatives and agreements, including an agreement with the Mohammed bin Rashid School of Government, which culminated in launching a Diploma in Tolerance, the first of its kind in the region. The initiative is in line with the strategy of the Ministry of Tolerance aimed at promoting tolerance as a noble humanitarian feature and a high moral value aimed at nurturing a tolerant generation that live in peace and happiness.