(Nabhan: We are keen to educate bus riders on public transport etiquette) 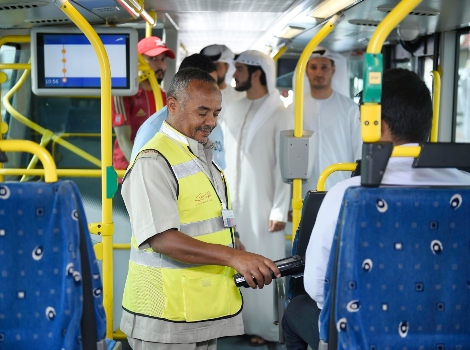 Roads and Transport Authority (RTA) and Dubai Police have launched joint inspection campaigns targeting public buses and bus facilities. The move is part of RTA efforts to ensure the compliance of bus riders with the rules and guidance in place.

The director of Passenger Transport Activities Monitoring at Public Transport Agency, RTA Mohammed Nabhan paid tribute to the effective efforts of Dubai Police to make these campaigns a success. “The campaigns, which continued four days, resulted in the issuance of 739 offences against public transport  etiquette. RTA provided awareness booklets and posters to bus riders explaining practices banned when riding buses, one of the most popular mass transit means,” he said.

One of the most frequent violations is the entry/exit of paid zones without paying the applicable fares. 577 offences were reported in this regard. Other violations relate to the use of public transport means & facilities contrary to the instructions displayed in directional signs. Offences also included the failure to show the nol card upon request, littering , accessing prohibited areas despite signs on display, sitting in places not designated for riders, eating or drinking in prohibited places, resting feet on seats and many others.