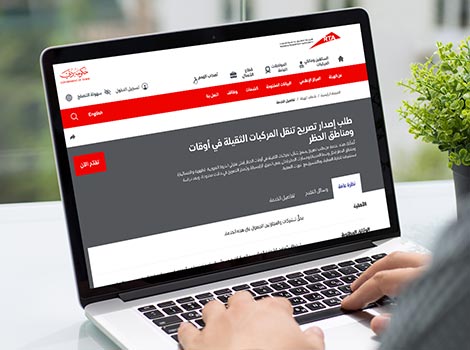 The Roads and Transport Authority (RTA) and the General HQ of Dubai Police have completed a link between the system of Right-Of-Way service permits relating to ‘Apply for a Mobility Permit for Over-Weight and Over-Dimension Vehicles and Apply for a Mobility Permit for Heavy Vehicles in Banned Times and Roads’ and the Smart Officer system of Dubai Police, so that they recognise police patrols on violating heavy vehicles, which do not have the necessary permit to pass on Dubai roads, through the Dubai Police system.

According to the prohibited timing, Dubai roads are classified into three categories. Complete 24-hour Ban: It applies to both the Airport and Shindagha Tunnels, Al Maktoum Bridge, the Floating Bridge, and Al Qudra Road. Partial Ban: From 06:00 am to 10:00 pm: applies to the city centre, Sheikh Zayed Road and Al Ittihad Road. Intermittent Ban: Thrice during day as follows: Morning Ban from 06:30 am to 08:30 am, a mid-day ban from 01:00 pm to 03:00 pm, and evening Ban from 05:30 pm to 08:00 pm. It applies to the rest of the streets of Dubai on which the three times curfew are applied

Through enforcing traffic ban timings on heavy vehicles, RTA intends to ease traffic congestion during peak times, especially when employees commute between home and work, besides maintaining the safety of road users. As for permits for trucks carrying oversized cargo, permits are issued for their movement at a time when the traffic movement is almost nil i.e., from 02:00 am to 05:00 am, upon permits issued from RTA.

“This cooperation will contribute to streamlining the traffic flow and easing the congestion resulting from the passage of violating heavy vehicles during the peak times set for Dubai roads. It will also step up the traffic safety level and contribute to realising RTA’s vision to ‘The World Leader in Seamless & Sustainable Mobility.’ This connection will also contribute to preserving the assets and properties of the Roads and Transport Authority on the streets and roads. ,” said Eng. Maitha bin Adai, CEO of Traffic and Roads Agency, RTA.

Major General Mohammed Saif Al Zafeen, Assistant Commander-in-Chief for Operations, Dubai Police, said, “This link enhances and facilitates the traffic enforcement measures. Police patrols will be able to identify heavy vehicles in violation without stopping them. The violation reported will either be for failing to obtain the required permit or breaching any of the conditions of the permit. The vehicle is not required to present a printed permit to show to the patrol as all details of the permit will be linked to the number plate of the truck and explained in the traffic systems of both parties. As such, this step will enhance Dubai’s migration to paperless transactions.”