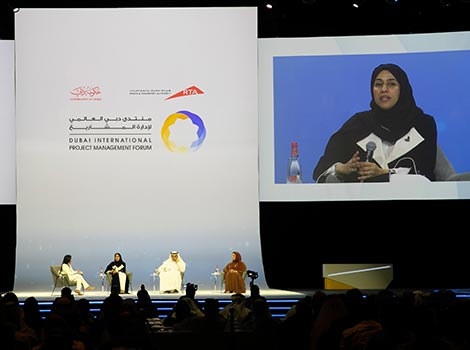 Participants in the opening session of the 8th Dubai International Project Management Forum (DIPMF) that took place from January 23-26 at the Jumeirah Hotel in Dubai, held under the patronage of His Highness Sheikh Hamdan bin Mohammed bin Rashid Al Maktoum, Crown Prince of Dubai and Chairman of The Dubai Executive Council, indicated that the UAE leadership has dedicated top attention to people, community development, and improvement of wellbeing for citizens as well as residents.

During the special session discussing the theme of Community Development and Enhancement of Wellbeing, participants added that the policies and strategies adopted by the UAE government are aimed at enhancing wellbeing and serving people.

Her Excellency Hessa bint Essa Buhumaid, Minister of Community Development, said, “The UAE prioritises the development of individuals and the achievement of well-being for its citizens and residents. Humans are at the heart of policies that the country has put in place since the establishment of the union by the founding leader Sheikh Zayed bin Sultan Al Nahyan. The UAE has made considerable advancements in global competitiveness indicators and topped the world in achieving 156 global indices. It ranked among the top 10 countries that achieved 432 indices related to well-being and community development.

"Now we have policies dedicated to wellbeing and 120 executive directors in entities and departments concerned with wellbeing. Policies and laws have been oriented to community members in general, people of determination, senior citizens, and target groups in particular,” added Buhmaid. She referred to the key role of community members in general from the private sector, individuals and entities in lending support to improve the well-being of service recipients.

“CDA strongly emphasises protecting, integrating, and empowering the most vulnerable groups within society, particularly in areas such as education and rehabilitation. The goal is to provide them with the necessary resources to enter the labour market according to their abilities and empower them to become productive members of society, contributing to sustainable development rather than being dependent on others,” added Julfar.

“Financial and social empowerment can lead to improved economic status and access to high-quality education, healthcare, and protection systems that enhance safety and stability for target groups, ultimately enhancing their overall wellbeing and that of their families.

“CDA is actively engaging the community in the policy-making process by gathering their input and feedback through various methods such as surveys, focus groups, brainstorming sessions, and in-depth interviews with experts. This ensures that the perspectives and needs of targeted groups and their families are considered when addressing challenges and developing solutions,” he further added.

“The General Secretariat of the Executive Council of the Government of Dubai has established a robust methodology for assessing the effectiveness of policies on two critical fronts: the social and wellbeing axis, and the economic axis.

CDA follows a comprehensive research methodology, as directed by the General Secretariat, that incorporates an integrated research system. This system comprises both secondary research, such as reviewing historical data and program outcomes and primary research, such as the social survey conducted by CDA every two years. This also encompasses various forms of research, including specialised surveys, focus groups with specific segments of society, in-depth interviews with experts, and brainstorming sessions to gather preliminary qualitative data,” explained Julfar.

“CDA conducts a comprehensive social survey every two years to assess the levels of happiness and satisfaction among all segments of society. By analyzing the results of the survey, CDA can identify areas for improvement and take necessary actions to enhance the quality of services provided to the community,” concluded Julfar.

“The UAE has achieved significant success in promoting overall wellbeing, as evidenced by survey results showing over 90% safety indicators and a 71% satisfaction rate with quality of life. These results demonstrate the country's strengths in fostering well-being, with a high level of general satisfaction and happiness being one of the key factors.

“The Well-being Committee was established in Abu Dhabi to closely track and evaluate key indicators of wellbeing in the emirate, leveraging data gathered through comprehensive surveys to gain valuable insights on the progress of the community in comparison to leading countries in the field of community development,” added Al Amimi.

“Based on the results of the survey, a comprehensive range of community initiatives have been launched to enhance well-being among residents in the emirate. These initiatives encompass a variety of areas, including programmes tailored to the needs of people of determination, job opportunities for individuals, a housing strategy, promoting well-being for families, the establishment of the Family Care Authority, the roll-out of a comprehensive policy for pensioners, the establishment of the Ewaa Centre for Humanitarian Care, and a focus on promoting community participation,” she concluded.