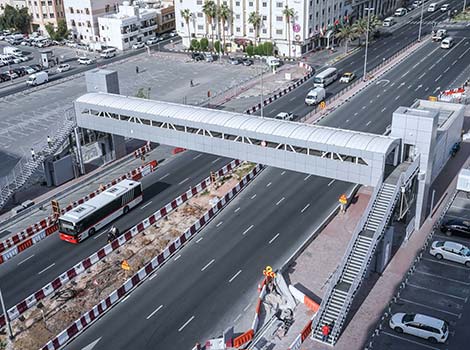 Dubai’s Roads and Transport Authority (RTA) has opened a pedestrian bridge at Khalid bin Al Waleed Street, Bur Dubai, and another one at Al Marabea' Street, Al Quoz. RTA built these bridges to enhance pedestrian safety and streamline the link between residential communities and business outlets.

Engineer Maitha bin Adai, CEO of RTA’s Traffic and Roads Agency confirmed the opening of these two bridges for the public and detailed their profiles. “The first bridge crosses over Khalid bin Al Waleed Street at Bur Dubai nearby Ascot Hotel. It links the two sides of a very busy street buzzing with year-round trading activities. The bridge is fitted with lifts to ease the movement of people between the two sides of the street,” she explained.

“The second bridge is built on Al Marabea' Street at Al Quoz. It mainly serves residents of the neighbourhood, and labours community. The bridge is fitted with ramps to streamline the movement of users. The construction of this bridge is expected to fend off the casual crossing of the street, which translates into fewer runover accidents.

“Work is currently underway in building a pedestrian bridge over King Salman bin Abdulaziz Al Saud Street at JBR. The bridge is so unique as it has stairs linking the four directions of the junction. It also boasts of an iconic design replicating the nature of buildings and coastal line of the area. All stairs will be covered for the convenience of users and the bridge will be fitted with lifts in the four directions,” she added.

Eng. Maitha called on residents and visitors to use pedestrian bridges and subways when crossing streets. She urged motorists to observe the speed limits and slow down when approaching pedestrian crossings for the safety of all road users.