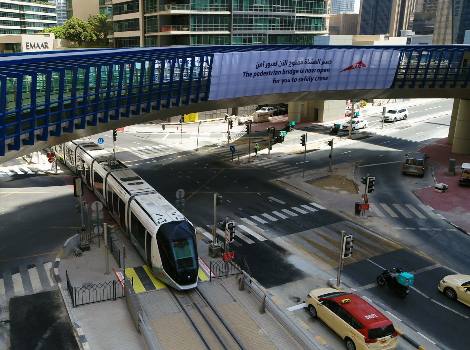 Dubai’s Roads and Transport Authority (RTA) opened today (Saturday) a 4-directional pedestrian bridge considered the first of its kind in Dubai. Located at the intersection of King Salman bin Abdul Aziz Al Saud Street with Al Gharbi Street at the entrance of Dubai Marina (nearby the JBR), the bridge has four escalators linking the four sides of the junction. The bridge boasts of a unique design echoing the urban architecture of the neighbourhood and coastal areas. It stretches 75 metres and handles about 8000 people per hour in all directions.

“The construction of pedestrian bridges in Dubai is a manifestation of the vision of His Highness Sheikh Mohammed bin Rashid Al Maktoum, Vice-President, Prime Minister of the UAE and Ruler of Dubai, to bring happiness to people and move to a sustainable transport model characterised by minimal pollution to the environment. It also echoes the directives of His Highness Sheikh Hamdan bin Mohammed bin Rashid Al Maktoum, Dubai Crown Prince and Chairman of the Executive Council, to make Dubai a bicycle-friendly city. Some footbridges are fitted with bike racks and cycling lanes. The construction of such bridges is also part of the traffic safety strategy targeting zero-fatality rate to rank Dubai amongst the world’s safest cities in traffic safety by 2021,” said Al Tayer.

“This pedestrian bridge features an iconic architectural design that adds to the appeal of Dubai Marina area, a key destination for visitors and sea-goers that offers a unique experience for residents and visitors of Dubai.

“The design of the bridge frontage is inspired by the urban nature of the area with a shape and colour that fit well with the pattern of surrounding buildings. The curved shape of the bridge emulates the coastal areas in great harmony with the neighbourhood. The bridge enables pedestrians to move freely between the four sides of the junction, thus avoiding any stop at light signals,” noted Al Tayer.

“Constructing a footbridge of this magnitude at the Marina has been prompted by a host of considerations. The junction is used by as much as 2300 people and 2000 vehicles during peak hours in each direction. More than 1000 people cross the junction to head to the JBR during weekends. Moreover, Dubai Tram crosses the intersection every six minutes. The area accommodates two Tram stations and one bus stop, and there are no pedestrian crossings nearby,” explained RTA Director-General and Chairman.

“RTA attaches special attention to pedestrians’ safety and has been keen on providing safe pedestrian crossing means since inception. It has commissioned traffic studies and concluded to a host of parameters to serve as pointers for selecting the locations of footbridges in Dubai. These determinants include the traffic intensity, number of pedestrian incidents and fatalities, speed limit, number of lanes, the intensity of movement of people between the two sides of the street, and the distance to the nearest pedestrian crossing. Factors dictating the construction of pedestrian bridges also include the locations of public bus stops, markets and public & private entities in addition to run-over hotspots,” he continued.

Al Tayer called on citizens, residents and visitors to use pedestrian bridges and subways when crossing streets. He also called on motorists to observe the speed limits and slow-down at pedestrian crossings for their safety and the safety of road users.

The number of footbridges constructed in Dubai soared from 13 bridges in 2006 to 129 bridges by the end of 2020. RTA plans to build other 36 footbridges during 2021-2026; which will bring the total number of pedestrian bridges to 165 bridges. In 2018 and 2019, RTA constructed three footbridges at the Sheikh Zayed bin Hamdan Al Nahyan Street, Al Khawaneej Street and Al Maraabi Street. In the following two years (2020 and 2021), RTA will complete the construction of nine footbridges at vital locations in Dubai. It remains to be said that RTA efforts to improve pedestrians' safety contributed to reducing pedestrian fatalities in Dubai by 76.6% between 2007 and 2019.