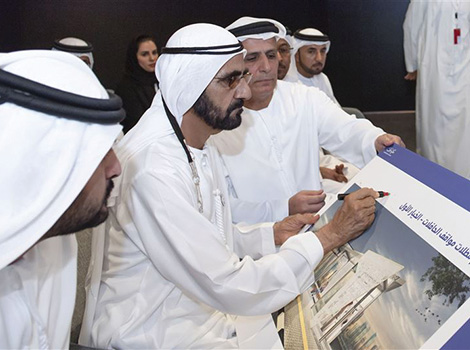 HH Sheikh Mohammed bin Rashid Al Maktoum, Vice President and Prime Minister of the UAE and Ruler of Dubai, has approved a package of future projects to be developed by the Roads and Transport Authority (RTA). The projects, aimed at enhancing the happiness of residents, include a Sky Garden, bicycle lanes and promenades at Sheikh Zayed Road, Umm Suqeim and Jumeirah Beach. His Highness also endorsed road and public transport projects as well as a five-year plan for constructing internal roads in residential districts (2019-2023).

His Highness reviewed the progress of road projects at Tripoli, Khawaneej, Mushrif Park and improvements of Dubai-Al Ain Road, and roads leading to the International City.

HH Sheikh Mohammed approved these projects during a recent visit to RTA. HE Mattar Al Tayer, Director General and Chairman of the Board of Executive Directors of RTA, briefed HH Sheikh Mohammed on the Sky Garden Project, a new footbridge boasting an iconic, stylish design measuring 380 meters in length and 60 meters in height and spanning an area of 3,422 square meters. Sky Garden promises to be a new tourist destination for residents and visitors. The bridge, which connects many of the city's landmarks along the shores of Dubai Creek, has a green environment extending along the bridge together with multi-level lanes for cycling and running. The project will offer a stunning panoramic view of old and new Dubai. It will also feature new commercial outlets and naturally shaded areas that encourage the practice of healthy outdoor activities.

HH Sheikh Mohammed also reviewed details of the Sheikh Zayed Road promenade located between Dubai World Trade Centre and Financial Centre Metro Stations. It utilises the area underneath the Dubai Metro viaduct and transforms it into a modern green space stretching 2.5 km open for visitors to engage in walking and cycling. The walkways include three main points - Bazaar Street, Technology Park and Urban Park spanning an area of 54,000 square meters.

A project undertaken by RTA in cooperation with Careem to operate 3,500 bicycles at 350 stations in Dubai was also reviewed by HH Sheikh Mohammed. The project will be the first bicycle-pool phased programme of its kind in the region. Careem will use smart features to track bicycles, predict high occupancy areas, and connect all bicycles through GPS, besides using environmental sustainability methods by operating solar-powered bicycle racks and connecting them to a wireless network. Customers can hire bicycles with their credit cards, NOL cards or smartphone apps linked with the S'hail system.

His Highness was briefed about the Skypods project, a suspended transit system that links vital spots such as the Dubai Financial Centre and the Downtown with the Business Bay. Passing through the Happiness Street and runs up to City Walk, through tracks extending 15 km in length. The project, which has 21 stations and the capacity to transit 8,400 riders per hour per direction, offers an urban transit experience that features modern-designed pods passing through Dubai’s towers. It is characterised by uniquely designed stations and rail-supporting structures extending along the track. The project will maintain design harmony with the Dubai Metro stations.

His Highness further attended a briefing about the Umm Suqeim promenade to be located between Mall of the Emirates and Madinat Jumeirah running 1,500 meters in length over an area of 28,000 square meters. It has three main recreational areas for families: City Hub Plaza, Time Out Plaza and Village Plaza. The project includes a landmark 110-metre pedestrian bridge above Jumeirah Street with dedicated cycling and running lanes, offering panoramic views of surrounding areas such as Burj Al Arab and Madinat Jumeirah.

His Highness reviewed the progress in the expansion of the Smart Traffic Systems Project, one of the strategic projects implemented by RTA to provide an integrated infrastructure of smart traffic systems that utilise artificial intelligence technologies, big data and the Internet of Things. It aims to raise the coverage of smart traffic systems in roads network in the emirate from 11% to 60%, improve accident and congestion monitoring time on the emirate’s roads to ensure a speedy response, and provide real-time traffic information about the condition of roads network via Variable Messaging Sign (VMS) and smart apps. The project will also enhance the efficiency of managing the traffic movement in major event venues such as Expo 2020.

When completed, the project will contribute to upgrading the Dubai smart traffic systems to bring it in line with advanced countries such as Singapore and South Korea where coverage exceeds 85%.

His Highness endorsed the new innovative design of public bus stations. The design caters to the needs of key densely populated areas as well as the current and future operational needs of public bus services. The stylish design of the stations blends its practical interior design with its external shape and utilises constructional elements to serve and integrate the architectural design.

His Highness reviewed the progress of key road projects currently being implemented by RTA including the Dubai – Al Ain Road Improvement Project over a sector that extends across 17 km. The project includes widening the road from three to six lanes in each direction, upgrading six key intersections, and constructing new bridges and service roads on both sides of the road. These improvements will enhance the traffic safety and step up the capacity of the Dubai – Al Ain road from 6,000 vehicles per hour per direction to 12,000 vehicles per hour per direction. It will also serve the developments on both sides of the road such as the Dubai Silicon Oasis, Dubailand Residence Complex, Liwan, Meydan One, and the Dubai Design District. It will provide entry and exit points for about 550,000 persons by 2030.

Sheikh Mohammed also reviewed the progress of the widening of Tripoli Street from two to three lanes in each direction over a 12 km sector from the intersection of Sheikh Mohammed bin Zayed Road up to Emirates Road. The project, which features the construction of four intersections, will reduce the congestion at Tripoli and Airport Streets by 30%, especially at the entry points of Mirdiff and Al Warqaa. It will also increase the capacity of the network by 12,000 vehicles per hour in both directions, and enhance the link between Dubai and Sharjah, which in turn will ease the traffic in surrounding residential areas, and cut the waiting time at the existing intersections from three minutes to less than a minute.

His Highness inspected the progress of the Shindagha Corridor extending 13 km from Sheikh Rashid Street, passing by Al Mina and Al Khaleej Streets up to Cairo Street. Works were completed during the construction of the junction between Sheikh Rashid Street and Oud Metha Street in April 2016.

Construction works on the junction of Sheikh Rashid Street with Sheikh Khalifa bin Zayed Street were completed in May 2018. Work on the construction of Shindagha Bridge (Infinity Bridge) is currently in progress. Construction of the Bridge is expected to be completed in May 2021, and work on the entry/exit points of Deira Island at Abu Baker Al Siddique Street is expected to be completed in May 2020. RTA will soon start construction works on the upper deck of Deira-bound Corniche Street. In the third quarter this year, it will start work on the improvements of the intersection of Omar Bin Al Khattab Street and Al Musalla Street with Al Khaleej Street. Works also include constructing the sloping road of the Infinity Bridge in Bur Dubai along with bridges connecting with Shindagha Tunnel besides improving the Falcon junction in the last quarter of this year.

His Highness was briefed on the progress of the Khawaneej Corridor and Mushrif Park Project. It covers the construction of three main junctions at Khawaneej Street and Al Amardi Street. Work on the intersection of Khawaneej Street with Sheikh Zayed bin Hamdan Al Nahyan Street include the construction of an underpass at Khawaneej Street along with a surface junction fitted with signals to ensure free and safe passage on Khawaneej Road. The work also includes the improvement of the existing roundabout at the intersection of Khawaneej-Al Amardi Streets and its conversion into a signalised junction.

His Highness was also briefed on the improvements made to Al Awir Road and the entrances to the International City, whose final phase was opened recently. The project contributed to reducing the distance covered when exiting the International City through Ras Al Khor. Improvements also resulted in widening Nouakchott Street from two to three lanes in each direction, as well as widening Al Manama Street, resulting in increasing the road intake by about 1,500 vehicles per hour per lane.