(Riders urged to use alternative buses and make pre-journey plans) 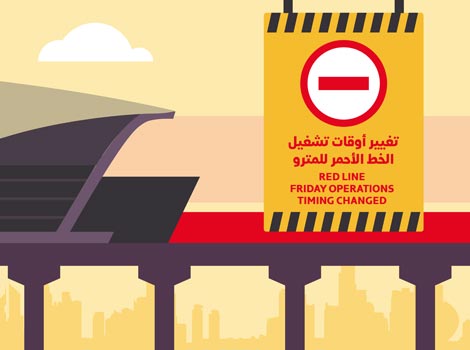 Roads and Transport Authority (RTA) is introducing a change in the opening hours of Dubai Metro Red Line, on Fridays only, commencing Friday January 31st 2020. This will include seven consecutive Fridays; 7th, 14th, 21st, and 28th February, 6th and 13th March 2020. On these dates, the metro service on the Red Line will start at 02:00 pm and continue up to 01:00 am (of the following day). Metro timing will revert to normal operational hours on 14th March 2020.

Abdul Mohsen Ibrahim Younes, CEO of Rail Agency, RTA, called on the public to use alternative transport modes and recommended them to plan their journeys in advance.

“The change of operational timing of the Dubai Metro Red Line on the above mentioned dates is dictated by the need to carry operational tests for the integration of the systems of Route 2020 and ensure the optimal operation of the network. It will also ensure that the regular service on those days is not disrupted,” said Younes.

“RTA is always keen on the smooth running of the metro service for riders on all weekdays, Fridays and holidays unless in exceptional cases, such as this. We are keen on improving the metro timings and tailoring it to the mobility needs of customers; which raise satisfaction and happiness with RTA services.” he added.

“Awareness messages are being broadcasted to metro riders about this change of operational hours through voice announcements at the metro stations, onboard metro cabins, and through leaflets and posters at the metro stations. Messages are also being transmitted via smart screens at stations and ticket vending machines as well as RTA’s website, smart apps and social media channels,” concluded Younes.