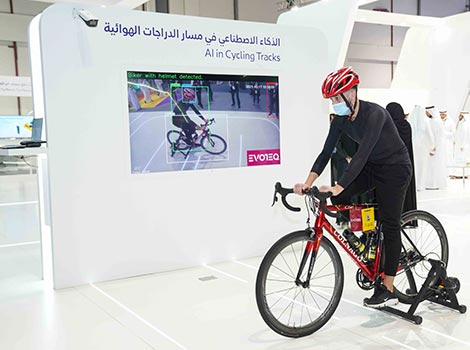 Dubai’s Roads and Transport Authority is featuring the ‘Using AI in Cycling Tracks’ solution at GITEX Technology Week 2021 which is a proof of concept developed by EVOTEQ, a digital transformation solutions provider. This revolutionary solution aims to ensure safer roads for cyclists by deploying digital solutions that create a meaningful impact on people’s lives.

During the exhibition, an overview and live demonstration of the solution will be presented at the Roads and Transport Authority (RTA) stand. The first phase of the POC was implemented at the Nad al Sheba cycling track in Dubai.

Mohammed Yousuf Al Mudharreb, CEO of RTA’s Corporate Technology Support Services Sector, said, “In designing the Smart Cycling Track, next-generation technologies such as the Internet of Things (IoT) and artificial intelligence (AI) have been used. The data gathered by this high-tech AI enabled platform will be leveraged to detect cyclists, joyriders, including joggers, and scooter riders, on the track and determine the current track occupancy. The smart solution also identifies the speed at which the cyclists are traveling and detects if they are wearing a helmet. Moreover, further trend analysis will allow the collected data to predict and prevent critical cycling incidents like crowded tracks and accidents, and alert authorities of increased risk conditions based on the collected data.”

“With the city’s aim of becoming the most cycling friendly city, the use of next-generation technologies is essential as cycling is not only a sport but also a vital link to serve first and last mile mobility needs. Technology today is a vital tool to enhance mobility means and make it smart and safe meets RTA’s vision; ‘The world leader in seamless & sustainable mobility’, he added.

Jihad Tayara, CEO, EVOTEQ, said: “Throughout the first phase of the PoC implementation, we focused on the utilization of the latest AI and IoT technologies to validate the viability of the solution by building and testing 4 keys features: cyclist detection, helmet detection, speed and total occupancy. As a following step, we've developed an extended project roadmap for the complete track journey for cyclists, which aims to improve their safety and experience.”

“In Dubai, the solution will help boost the government’s efforts to make the emirate a bicycle-friendly city, as well as promote cycling as a form of sport and fitness activity. We are committed to supporting the government’s road safety initiatives, in line with the vision of our wise leadership,” Tayara said.