(Bahrozyan: The launch marks the first initiative towards the future of taxi and autonomous shared transport) 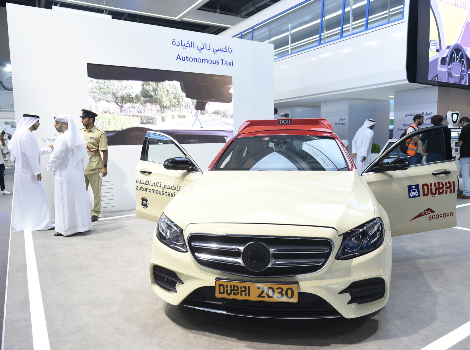 Roads and Transport Authority (RTA) through its stand at GITEX 2018, has exhibited the first ‘Autonomous taxi’ in the region. The technology underscores RTA’s commitment to enhance the Dubai Government’s Strategy to convert 25% of total journeys in Dubai into autonomous transit by 2030.

“The vehicle has been designed in conjunction with the Dubai Silicon Oasis and DG World (Digirobotics). The vehicle offers an innovative solution for challenges associated with the first and last mile as well as internal roads in several residential communities and entertainment venues,” said Ahmed Bahrozyan, CEO of RTA’s Public Transport Agency.

“The vehicle features high safety and security standards. It can remotely scan and figure out the surroundings, such as light signals and the four sides of the track through a GPS system. It can monitor any object that may have the potential of triggering a collision.

“The trial run of the vehicle will start towards the end of 2018 year at designated routes in Dubai Silicon Oasis and continue for three months. The vehicle can drive at a speed of up to 35km per hour and can accommodate four riders including a standby driver in the cabin. The driver’s service can be called in when the vehicle experiences a potential technical glitch by pressing a button, which shifts the operation from autonomous driving to the human driving mode,” explained Bahrozyan.

The launch of the autonomous taxi achieves multiple objectives. It contributes to realising the vision of our Government to transform 25% of mass transit journeys to driverless transit means by 2030. It also achieves RTA’s strategic goals: ‘Smart Dubai’ and ‘Advance RTA.’ In its capacity as the body concerned with the introduction of advanced technologies in public transport means in Dubai, RTA is making every effort to keep pace with the top standards of the industry worldwide,” concluded Bahrozyan.