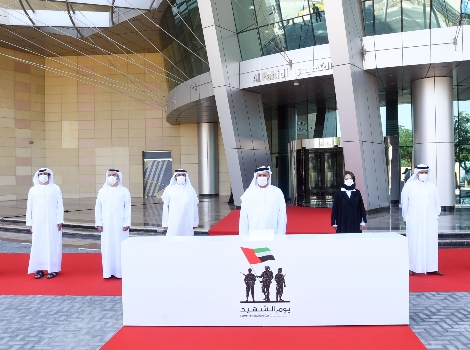 His Excellency Mattar Al Tayer, Director-General, Chairman of the Board of Executive Directors of the Roads and Transport Authority (RTA), accompanied by several CEOs and Directors, have flown the UAE flag at half-mast at the Head Office of RTA. They have also observed minute’s silence in commemoration of the lives of the nation’s martyrs. The move is also a gesture of solidarity with the families and relatives of martyrs on the Commemoration Day, celebrated on November 30th each year.

His Excellency Mattar Mohammed Al Tayer, Director-General, Chairman of the Board of Executive Directors of the Roads and Transport Authority (RTA) said, “The Commemoration Day is an occasion to celebrate our martyrs who sacrificed their lives while on duty for the nation. It is a day for us to recall the noble values, sacrifices, patriotism and loyalty to our leaders.

Under the leadership of His Highness Sheikh Khalifa bin Zayed Al Nahyan, President of the UAE, Supreme Commander of the Armed Forces; His Highness Sheikh Mohammed bin Rashid Al Maktoum, Vice-President, Prime Minister of the UAE, Ruler of Dubai; and His Highness Sheikh Mohammed bin Zayed Al Nahyan, Abu Dhabi Crown Prince, Deputy Supreme Commander of the Armed Forces, the UAE is setting a decent example of doing whatever it takes to protect the Arab soil. The UAE flag will continue to flutter high in the sky, thanks to the sacrifices of our valiant soldiers who spare no effort in delivering their national duties at home and overseas.