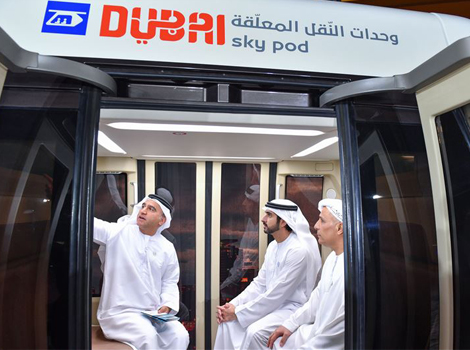 HH made these remarks during a visit to the Metro Depot at Al Rashidiya, where he was received by HE Mattar Al Tayer, Director-General and Chairman of the Board of Executive Directors of the RTA. HH inspected two models of Dubai Sky pods; a futuristic mobility system in Dubai Emirate. It is characterised by using an area of land that is 100 times less than conventional means of the same capacity. Its power efficiency is five times less than electric vehicles and the system requires infrastructure, which is ten times less than conventional transit systems of the same capacity.

The first model of the Dubai Sky pods Units is (Unibike). It is a small-size, and lightweight transit mean fitted with steel wheels to move on suspended rails. They combine the features of high-performance electric vehicles, in addition to sport, recreation ones, and the electric systems powering the vehicle. The units can be fitted with power generator likewise the bicycle and as such can be driven by the power of riders. Each unit can accommodate one to five riders along with individual transport design. They can travel at a maximum speed of 150 km/h and lift about 20 thousand riders per hour.

The second model of the Sky pods Units is (Unicar). It is designed to lift passengers for a distance up to 200 km. These units have a stylish design and conform to Dubai’s global standards. Such ultra-modern innovative systems assist in the smooth mobility through a high-rise network linking between high-rise towers. The unit can accommodate one to six riders and travel at a maximum speed of 150 km/h. The network can lift about 50 thousand riders per hour.

HH also inspected the new train of the Dubai Metro which has recently arrived and is being tested at the Depot. He checked the additions and improvements made to the interior of the metro carriages such as dedicating the last carriage to women and children and leaving part of the first carriage for the Gold Class. Other carriages were designated as Silver Class. Seat distribution was made transversal in the Gold Class, and longitudinal in the Silver Class as well as women & children’s carriage. This seat configuration will increase the capacity of each train from 643 riders to 696 riders. The exterior design of trains remained unchanged to maintain the design identity of the Dubai Metro with its familiar colours to the public.

HH inspected the world’s latest rail maintenance system; Grinding Machine automatically restores worn tracks, and realigns the rail tracks with the train wheels and thus eliminates the risk of rail breaking. The system contributes to a longer lifespan of the train infrastructure and considerably reduces the level of noise and vibration resulting from the rolling stock. It also reduces the maintenance cost of rail tracks, thanks to a precise and automated preventive maintenance system. It also generates instant measurements of rail tracks, thus reduces human errors.

HH inspected Range Rover Evoque convertible limo and the Dubai Taxi limo bike. The convertible limo offers a unique mobility experience befitting the luxury of Dubai. It will be rolled out in certain areas such as Burj Khalifa, Burj Al Arab, JBR and City Walk. The Limo Bike offers riders and tourists an exceptional mobility experience, especially in winter, besides providing practical solutions to smooth and quick mobility during peak hours at high-population-density areas. It assists the integration of transit systems through easing the mobility of public transport riders to their last destinations (last mile).

HH also inspected the Mobile Command Vehicle in support of roads & transport-related emergency and crises. The vehicle is fitted with cutting-edge technologies such as wireless connection with the Enterprise Command and Control Center (EC3) and satellite connectivity enabling direct transmission to the Center from the site.

HH was briefed on RTA’s AI experience highlighted by Dubai Metro, the world’s longest driverless metro. The use of AI in the Dubai Metro fully automated operation covers automated journey planning, lines signalling system to enhance security, and risk prevention, such as the collision, while enabling trains to travel at maximum speed. This system has reduced operational costs by 7% and improved punctuality by 6.4%. AI technology is also used at the EC3 for handling Big Data, as well as simulation system, traffic forecasting, crowd control and self-learning, using advanced intelligent tools capable of handling 75 million mobility data log per day. These technologies helped the RTA in planning smart mobility, leveraging transport efficiency, and improving customer experience.

“The RTA uses AI in drones to list and classify RTA’s assets, and monitor traffic movement, emergency & accidents cases. It also uses AI in smart cameras to spot vehicles using dedicated bus routes, which improved punctuality of public buses & taxis by 20%, reduced direct & indirect operational costs of transit modes, and cut carbon emissions. The RTA also uses AI at the Smart Testing Yard involving the introduction of innovative technology, cameras and high-performance sensors connected to a central processor capable of retrieving data, registering errors automatically, and deciding the pass or fail in an automated and transparent manner. The AI is also applied in smart traffic signals with sensors connected to a ground optical system synchronised with the signal light is operation. It detects pedestrians’ movement on pavements (before crossing streets), on walkways (while crossing streets) and accordingly adjusts the remaining time automatically. It allows a safe & smooth crossing for the largest possible number of pedestrians,” said Al Tayer.

Reflecting on the use of AI in implementing Dubai Autonomous Mobility Strategy, Al Tayer said: “The RTA has used this technology in the pilot operation of an electrically powered, high-safety autonomous vehicle, which can accommodate up to 10 passengers; and in the first autonomous air taxi capable of carrying two passengers. AI has also been introduced to the new generation of robot-based vehicle inspection, smart vehicle inspection glasses, fault-reading & vehicle inspection robot, and parking smart scan system, enabling automated scanning and monitoring of more than 1,000 parking spaces.”

In the field of customer service, the RTA implemented AI in the Automated Chat System (Mahboob), and AI Happiness Index Personal Assistant with Smart Loudspeakers, which replies to customers' inquiries in an interactive manner. At the staff level, the RTA has installed Al Raqeeb System in buses to monitor drivers while driving. The system has built-in cameras and sensors to alert drivers, especially in cases of fatigue or distraction.

HH the Crown Prince of Dubai attended a presentation highlighting RTA’s efforts in operating the autonomous air taxi which was run tentatively in 2017. The technical specifications are currently being set after finishing the assessment of air taxi manufacturers. The specifications are based on several criteria highlighted by technology maturity, safety & comfort, air traffic integration, traffic management of manned planes & drones, and the provision of infrastructure for taxi landing points.

HH was also briefed on the progress of preparations for the Dubai World Challenge for Self-Driving Transport Congress, which aims to showcase the leading role of Dubai Government in self-driving mobility. The event also seeks to bolster the development drive to achieve the goals of the Dubai Autonomous Mobility Strategy, attract self-driving expertise, and diffuse awareness about modern & future transport technologies. The Challenge covers three pillars: self-driving vehicles integrated with public transport; self-driving vehicles used for transporting passengers within certain zones; and self-driving vehicles that link parking lots with entrances of destinations. The RTA has already started receiving applications for participation since February 2018. The names of those qualified for the Challenge finals were announced last October, and the winners will be honoured in October 2019.