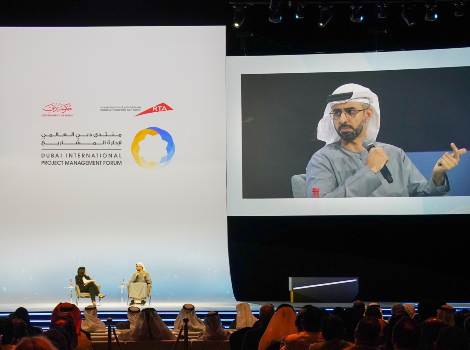 The sessions of the 8th Dubai International Project Management Forum (DIPMF) (25-26 Jan 2023) saw intense participation and significant interaction of participants and visitors from the UAE and the world over. The first day included a conversational session titled: The Future directives of AI and advanced technologies in the UAE, with His Excellency Omar bin Sultan Al Olama, Minister of State for Artificial Intelligence, Digital Economy and Remote Work Applications.

Al Olama opened the session by recalling the initiative of His Highness Sheikh Mohammed bin Rashid Al Maktoum, Vice-President, Prime Minister of the UAE, Ruler of Dubai to set up the eGovernment, which was transformed over several years to become a smart government driven by innovation and AI.
“The principles laid down by His Highness in this regard are viewed as a roadmap that ensures top quality services and wellbeing of all community members,” said Al Olama.

“Those using AI have taken the lead in envisioning the future as the next few years will see fast-paced developments in this field, which has become part of all sectors across the nation, including public transport, health, education, entertainment, services as well as the energy sectors like oil, gas and renewable energy.

“The UAE has a great interest in AI and undertook several initiatives, including the establishment of Mohamed bin Zayed University of Artificial Intelligence, rendering it the first ever university of its kind in the region and the world. Before that, the UAE launched the National Artificial Intelligence Strategy in 2017, which prompted the government sector to innovate in providing public services. Accordingly, this drive thrived the private sector, which in turn started to innovate, likewise the government sector,” commented Al Olama.

He concluded by affirming the UAE’s commitment to attracting global talents in artificial intelligence and the digital economy to work in the UAE and enjoy this unique work environment that will help them showcase their talents and creativity and take advantage of the huge opportunities that the UAE had provided in this area.

In October 2017, the UAE launched the National Artificial Intelligence Strategy, which ushers in a new era after the smart government. The services, sectors, and future infrastructure will revolve around this strategy in line with the UAE Centennial 2071, which seeks to rank the UAE the best in the world in all fields.