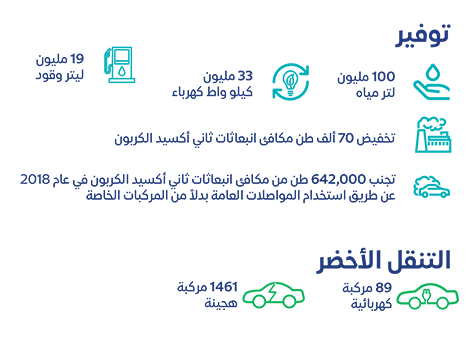 As part of its strategy for the optimal use of resources and energy, Roads and Transport Authority (RTA) has carried out 74 initiatives encompassing prominent projects in the field of green economy, environmental sustainability, and power efficiency. The ultimate objective of this drive is to use sustainable options and respond to the UAE Green Growth Strategy launched in 2012 under the theme: ‘Green Economy for Sustainable Development.’ The strategy is based on six drivers namely: Green Economy, Government Policies, Green Urban Planning, Tackling the Effects of Climatic Change, Rational Use of Natural Resources, and Green Technology.

“RTA attaches top priority to a green economy and sustainable environment, which is encapsulated in its 5th Strategic Goal (Safety and Environmental Sustainability). In this regard, it has accomplished 74 initiatives aligned with the strategic drive of the UAE and Dubai Government,” announced Ms. Nada Jasim, Director of Safety, Risk, Regulation and Planning, of RTA’s Strategy and Corporate Governance Sector.

“Initiatives undertaken in 2018 spread across all operational sectors and agencies covering the efficient use of energy, fuel and water, renewable energy, waste management, and low carbon footprint in Dubai. Such initiatives contributed to saving 100 million litres of water, 33 million KW of electricity, 19 million litres of fuel besides reducing carbon footprint by 70 thousand tons of CO2 equivalent.

“RTA is very much focused on the responsible use of water in all services provided. Examples of initiatives rolled out include the treatment and recycling of water used in washing taxis and public buses, and the installation of a closed cycle enabling the recycling of 90-100% of water resulting from these processes.

“RTA contributes to reducing the carbon footprint in Dubai by increasing the number of public transport users (Dubai Metro, Tram and public buses). Using public transportation, instead of private vehicles, had saved 642,000 tons of CO2 emissions in 2018. RTA also takes the initiative in developing plans and strategies that support the local and federal policies to push the profile of Dubai as a global leader and contribute to the achievement of UAE Centennial 2071,” concluded Jasim.