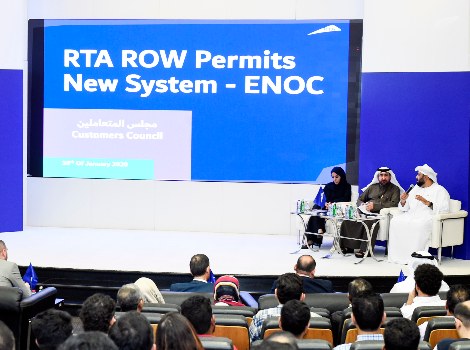 The Customers Council of Roads and Transport Authority (RTA) discussed with customers or RTA issues related to right-of-way permits system (ROWPS) and no-objection certificates (NOCs). The gathering was held as part of RTA’s strategy to screen the needs, ideas and suggestions of customers in line with RTA’s strategic goal: People Happiness.

Attendees of the session included Mohammed Obaid Al Mulla, Board Member and Chairman of the Customers Council; Adel Al Marzooqi, Director of Right of Way; Muhailah Al Zahmi, Director of Customers Happiness and Deputy Chairman of Customers Council, in addition to several managers of RTA Right-of-Way Department. About 228 representatives of contractors, developers, consultants and strategic partners attended the gathering.

At the start, Al Mulla welcomed attendees and stressed RTA’s keenness to hold discussions with various segments of customers to identify their needs and expectations as well as their proposals and ideas. He noted that such a gathering would contribute to realising the public interest as well as RTA’s objectives of bringing happiness to people through the delivery of quality services.

The event started by a visual presentation about RTA ROWPS, and ENOC. Attendees engaged in elaborate discussions that yielded 10 ideas of relevance to RTA services. Suggestions made were related to the ROWPS such as generating and printing the fees payment receipts via the new electronic systems. Among proposals made was to refund deposits online rather than manually, standardise procedures under one roof, such as those relating to Etisalat and du, and slashing the period for obtaining permits from 3 days to 1 day at most.

A suggestion was made to link the use of the parking system with the ROWPS, and change the technical conditions/specifications of barriers used in diversions. It was also suggested to add more than one e-mail in the new system such that all notifications would be delivered to companies and authorised personnel for update and follow-up.

Attendees also proposed associating the ROWPS with the RTA HQ, and enabling companies to pay parking fees through RTA ROWPS when applying for ROW permits instead of entering the parking system or visiting customers happiness centres. A suggestion was made to send an e-mail notification when the transaction is referred from one department to another.

The Customers Council recommended to refer those suggestions to the Customers Relations Management System for studying and implementing the viable ones. Attendees hailed the transparency and attention to making suggestions during the gathering.