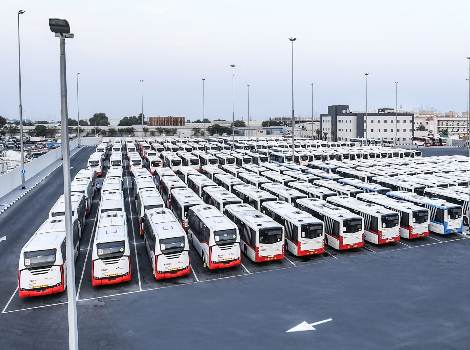 His Excellency Mattar Mohammed Al Tayer, Director-General and Chairman of the Board of Executive Directors of Roads and Transport Authority (RTA), announced the completion of Al Quoz Bus Depot to support the daily movement of buses. The new facility, which complements other bus depots at Jebel Ali, Al-Khawaneej, Al Ruwayyah , Al Aweer and Al Qusais, serves buses operating on 24 routes all over Dubai.

During a visit, Al Tayer inspected the operational readiness of the depot where employees, engineers, technicians and drivers were deployed in various capacities. Al Tayer heard a briefing about the components of the station, which includes a residential quarter comprising of 102 rooms to accommodate 368 drivers, food court for 120 individuals, clinic, rest area, plaza, and gym.

The depot has an 18-bay workshop for electromechanical maintenance, air-conditioning, oil and tyres. It is fitted with two hydraulic cranes, brakes testing area, and a painting corner as well as automatic doors to protect against dust and water. It also has an area for automatic and manual wash linked to a system for filtering and recycling the washing water. The depot has a parking area to accommodate 273 buses in addition to offices for employees and technical staff.

“The construction of this depot complements RTA’s efforts to upgrade the infrastructure of mass transport to encourage people to use public transit means in their daily movement. It will also boost the integration of multi-modal transport, reduce the operational cost of buses, and meet the needs of Expo2020 bus service, which will accordingly ease the mobility of visitors and organisers,” said Al Tayer.

Al Tayer praised the facilities of the depot that has advanced technical equipment for carrying out maintenance jobs as well as testing and measuring instruments together with a warehouse for spare parts. He stated that all RTA bus depots were built and operated at the highest international safety standards.