Completing 80% of roads leading to ‘Jewel of the Creek’ Project 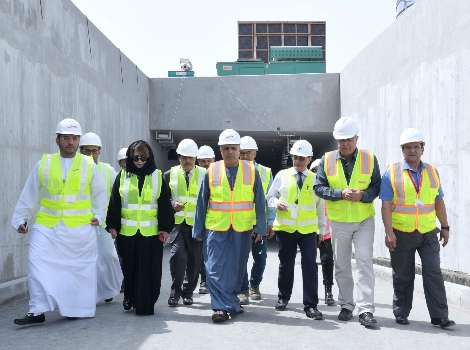 HE Mattar Al Tayer, Director-General and Chairman of the Board of Executive Directors of Roads and Transport Authority (RTA) announced the completion of 80% of road works  leading to Jewel of the Creek Project undertaken in collaboration with Dubai International Real Estate. The project, which lies between Al Maktoum and the Floating Bridges, boasts of a design rendering it a landmark tourist destination, adding further prominence to the city and the tourist profile of the area. All construction of  road works  and underpasses of the project are scheduled for completion by June end.

Al Tayer made this statement during a site visit of the project, which includes the construction of entry and exit points of the Jewel of the Creek Project; promises to be an iconic architectural addition to the shores of Dubai Creek.

“The project includes the construction of tunnels extending 1.4 km and roads spanning 7 km. The ground and basement access points of the Jewel of the Creek Project have been linked with Baniyas Street to the north, and Al Ittihad Street to the east through streets, tunnels and slope roads leading to the basement parking of the project. The project also includes the construction of a footbridge extending 81 metres crossing over Baniyas Street by the last quarter of this year together with other lighting works as well as protecting and shifting the existing utility lines,” explained Al Tayer.

The Northern access of the project comprises entry points to the basement parking through the tunnel for traffic bound to the west of Baniyas Street and the traffic inbound from the slope road of Al Maktoum Bridge. It also includes exit points for the basement parking through the tunnel to Baniyas Street towards the East and West in addition to exit points to the North-East leading to the sloping Eastern road from Al Maktoum Bridge to Baniyas Street.

It is noteworthy that the Jewel of the Creek Project, which spans in an area of 125,675 square metres, encompasses a 5-star hotel with 438 rooms, four residential towers comprising 756 serviced apartments, 20 restaurants, man-made lake, and a waterfront promenade and marina for 65 berths. The project also includes a 4-star hotel with 403 rooms, 3-star hotel with 405 rooms in addition to two connected residential towers comprising 389 serviced apartments featuring an Arabic-Islamic design, mini-mall, and a parking space for about 6000 vehicles.