Commercial spaces for lease at the metro stations of Route 2020 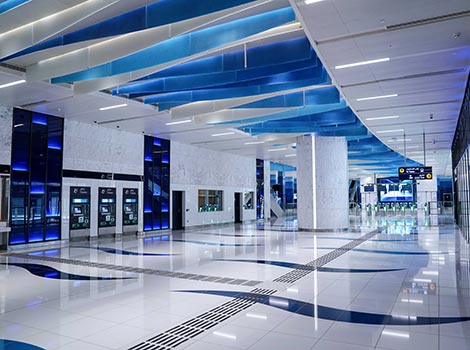 RTA called on the business community and investors all over the UAE to benefit from this new business prospect generated by the 15-km Route 2020, which serves densely populated areas inhabited by more than 270 thousand individuals.

“These stations offer 40 retail outlets spanning an area of 15,860 square feet in addition to 5 sales kiosks. Metro stations of Route 2020 offer a brilliant investment opportunity for entrepreneurs as they are considered high-attraction spots for shoppers and tourists on the move,” said Abdul Mohsen Ibrahim Younes, CEO of Rail Agency, RTA.

The retail outlets at the metro stations are attractive to metro riders and motivate them to make their journeys more enjoyable, besides uplifting the level of service offered to the public in the surrounding communities. These outlets create unique investment opportunities for the retail sector as they offer businesses direct access to metro riders. Since the launch of the metro project in 2009, metro stations contributed to fulfilling RTA’s strategic objectives of reaching to new urban and economic zones, such as Expo, which will be up-and-running in October 2021.

“Offering retail outlets in Route 2020 is in line with RTA’s endeavours to stimulate the domestic trade and inject fresh growth prospects. The success that marked retail outlets of the Dubai Metro stations on both the Red and Green Lines stems from the success and excellence of the Dubai Metro project. It demonstrates the confidence reposed by the public in this pioneering project that has generated a positive impact on the daily life of people,” concluded the CEO of Rail Agency.