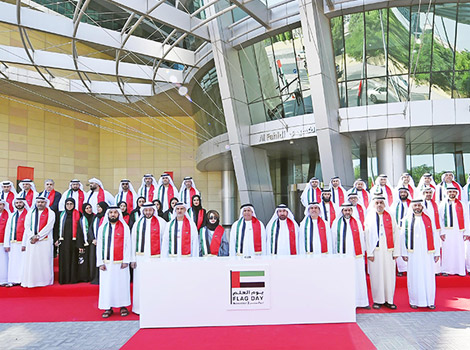 Roads and Transport Authority (RTA) took part in the nation’s celebrations of the Flag Day in response to the initiative launched by His Highness Sheikh Mohammed bin Rashid Al Maktoum, Vice-President and Prime Minister of the UAE and Ruler of Dubai, in 2012.

HE Mattar Al Tayer, Director-General and Chairman of the Board of Executive Directors of RTA, hoisted the state flag on RTA Head Office in the attendance of CEOs, Directors and scores of RTA employees. Al Tayer expressed his pride on this day as it replicates the coherence of Emiratis and depicts the spirit of loyalty to our leaders and nation.

“The Flag Day will remain glorified in our lives, and an occasion to renew our loyalty to His Highness Sheikh Khalifa bin Zayed Al Nahyan, President of the UAE; Highness Sheikh Mohammed bin Rashid Al Maktoum, Vice-President and Prime Minister of the UAE and Ruler of Dubai, and His Highness Sheikh Mohammed bin Zayed Al Nahyan, Abu Dhabi Crown Prince and Deputy Supreme Commander of the Armed Forces, as well as Rulers of the Emirates. We pledge to do what it takes to protect our union, and remain a coherent nation under the national flag; the symbol of our pride and prestige.