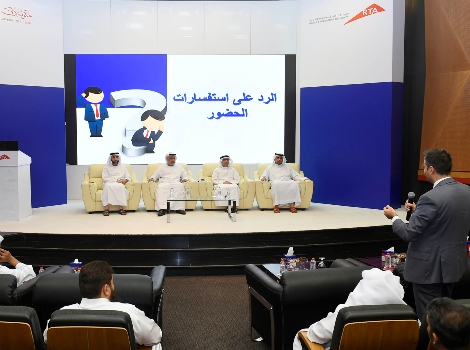 Roads and Transport Authority (RTA) held a two-day induction workshop for more than 100 members of Dubai SME’s to familiarise them with the contractual systems used in RTA’s contracts & procurement. The step was part of endeavours to support the private sector and enable it to engage in business with RTA.

“The induction workshop, which has attracted over 100 companies listed under Dubai SMEs, reflects RTA’s efforts to step up cooperation and empower owners of these firms to play an active role in business and investment matters of relevance. The workshop covered RTA contractual systems, registration through the website, log-in to the RFP system, uploading the required documents and the issuance of e-Qualification Certificate,” said Saeed Al Marri, Director of Contracts & Procurement, Corporate Administrative Support Services Sector.

“The workshop explained Tejari system for government procurement/Suppliers System (i-supplier), and the e-tendering system. It also covered the smart applications that enable companies to remotely track qualification and invoices in line with the Dubai Paperless Strategy; which will add to the happiness of companies. The RTA has set out plans offering this segment of companies potentials of contractual relationships as it is the nucleus of future pioneers,” he added.

“RTA had endorsed the initiative for honouring large companies that make the highest number of transactions with SMEs, as subcontractors, in the annual ceremony to honour suppliers.  An internal team had been set up to support these companies, and a communication channel (SME.Procurement@rta.ae) had been opened to assess the needs of these SMEs and lend them the required support,” concluded Al Marri.