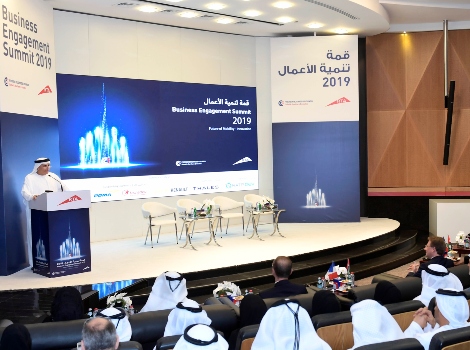 HE Mattar Al Tayer, Director-General and Chairman of the Board of Executive Directors of Roads and Transport Authority (RTA), opened the second edition of the Emirati-French Business Engagement Summit, held under the theme: The Future of Mobility and Innovation. The summit was held by RTA in cooperation with the French Business Council.

Attendees included HE Ludovic Pouille, Ambassador of France to the UAE, Raja Rabia, Consul General of France in Dubai, and Patrick Pélata, Advisor to the French President for Autonomous Vehicle Affairs. The event drew the participation of 65 organisations representing French public and private sectors from both UAE and France.

Al Tayer was delighted with the opening of the Emirati-French Business Engagement Summit. “This gathering aims to promote the commercial & investment cooperation between RTA and the French business community. In particular, it seeks to boost the business relationships between the two parties in autonomous mobility, future of mobility, innovative project financing, and big data, especially as RTA is gearing up for holding the Dubai World Congress for Self-Driving Transport this October. During the event, winners of the Dubai World Challenge for Self-Driving Transport, the first of its kind worldwide, will be felicitated.”

We, at RTA, are proud of the excellent relationships with the French Business Sector. French firms were involved in projects to the tune of AED 14 billion highlighted by Dubai Tram, and the Enterprise Command & Control Centre. Currently, the Expolink Consortium, led by Alstom, is undertaking Route 2020 Project for extending the Dubai Metro Red Line to the site of the Expo.
RTA was a pioneer in developing cooperation models and practices with the private sector in delivering a variety of infrastructure projects relating to roads and transport systems. There are promising prospects for the private sector to engage with the RTA in constructing more projects under the integrated transport plan of Dubai.

HE Ludovic Pouille, Ambassador of France to the UAE, stressed that cooperation between the RTA and the French Business Community had demonstrated the strong partnership between the Emirati and French companies in holding this summit about the future of mobility and innovation. “It offers a platform for exchanging the best practices in the field of smart mobility; which fosters an environment conducive to business and investment,” he added.

Patrick Péleta, Advisor to the French President for Autonomous Vehicle Affairs, said, “France is endeavouring to realign its ecosystem with the associated industries and services. It seeks to undertake several projects relating to electric and autonomous vehicles, infrastructure and shared transport using simulators. These companies can support the transformation process in Dubai,” he noted.

“RTA has experienced tremendous growth of its service portfolio and assets since inception in 2005, and have equally set ambitious plans with a significant expansion of the network and services. To deliver its plans efficiently, and meet the challenges of maintaining excellence; RTA has developed an investment strategy having multiple commercial initiatives to be delivered in partnership with the private sector.  We are exploring different options of alternative financing, commercial transformation, and remain committed to partnering with the private sector by creating investment opportunities.  This summit is a great example of our efforts to engage with the private and business sectors, and collaborate to reach our goals,” added Al Haddad.

“RTA is constantly striving to implement new ideas for improving the emirate’s transport system and mobility, and we are developing advanced models. The mobility systems of the future are likely to be very different from what exists in most of the world today, so governments and the private sector will need to pave the way for new technologies, services, and modes. We, at RTA, have many initiatives combining shared mobility, autonomy, electrification, public transport, and infrastructure. We continue to push the envelope on innovation in partnership with other countries and the private sector. Last year RTA launched the Dubai-World challenge for Self-Driving Transport amongst which some French companies are finalists,” said Bahrozyan.