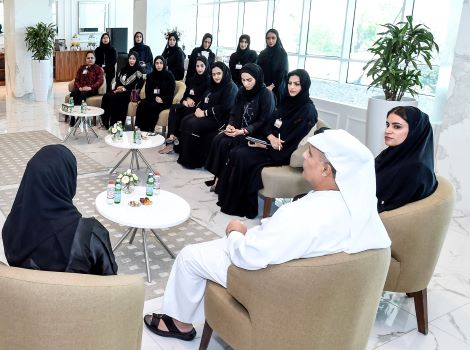 His Excellency Mattar Al Tayer, Director-General and Chairman of the Board of Executive Directors of Roads and Transport Authority (RTA),  stated that Women in the UAE were privileged by the immense patronage of His Highness Sheikh Khalifa bin Zayed Al Nahyan President of the UAE; His Highness Sheikh Mohammed bin Rashid Al Maktoum Vice-President and Prime Minister of the UAE and Ruler of Dubai; His Highness Sheikh Mohammed bin Zayed Al Nahyan Crown Prince of Abu Dhabi and Deputy Supreme Commander the Armed Forces; and Members of the Supreme Council Rulers of the Emirates. He noted that the state had attached every attention to the empowerment of women and allocated all resources to enable them to play an active role in building the country and the community, besides seeking to raise women profile in local and international events.

Al Tayer made these remarks in a speech at the ceremony held by RTA Women Committee marking the International Women's Day (8 March). On the event, Al Tayer congratulated Her Highness Sheikha Fatima bint Mubarak, Chairwoman of the General Women's Union, Supreme Chairwoman of the Family Development Foundation, and the President of the Supreme Council for Motherhood and Childhood (Mother of the UAE) as well as RTA female employees. He added that celebrating the International Women's Day (IWD) offered a chance to shed light on the achievements of women in various social, political and economic fields.

During the ceremony, Al Tayer honoured 20 distinguished female employees in recognition of their hard work and tireless efforts to raise the image of RTA. He also announced the launch of Tamayyaz Fund with multiple rewards for Women Committee to honour excellent-performing female employees in various capacities.

Tamayyaz Fund aims to showcase the skills and talents of female employees and hone their competence and job performance to leverage their productivity and excellence. The Fund directly engages with female employees and assists them to make prominent contributions and participate in various events of RTA, especially those related to Women committee.

“RTA is keen to encourage working women and nurture a suitable environment for them to take up leading positions and contribute to the betterment of RTA. Currently, we have about 821 females working at RTA constituting 22% of our total employees. It is noteworthy that 82 of our female employees are posted in leadership positions, thus constituting 25% of RTA’s leadership positions,” revealed Al Tayer.

Al Marri hailed the support of HE Mattar Al Tayer to female employees through nurturing a suitable working environment for women and grooming them to take senior positions within RTA. The establishment of Women Committee also raised the role of RTA working women and enhanced the cooperative spirit amongst female employees. Such a positive environment supported the efforts of developing female leaders to realise RTA’s objectives, leveraging female activities and raising RTA’s profile in the community. Establishing a nursery for the children of working mothers and a Mother & Child Corner are further deliverables of such a drive,” added Al Marri.

RTA Women Committee had held a host of events marking the International Women's Day. It hosted the Emirati Dr Suad Lutfi who delivered a lecture about ‘Women Achievements during Zayed Era’ and reflected on her successful experience in the medical field.

Dr Suad held a discussion panel with RTA female employees and leaders where she recapped her pioneering professional career and impressive personal experience. She reviewed the highlights of her academic career along with the challenges and achievements she made in the medical practice. Such achievements merited her to be an inspiring model for UAE females and motivator to prove their mettle.

Attendees of the session with Dr Lutfi raised inquiries on several aspects and topics relating the role of Emirati women in the community. Discussions focused on women’s determination to achieve self-realisation in professional and all walks of life. Matters discussed also included the excellent efforts of women to innovate and strike a balance between family and work.

Other events held on the IWD hosting a female specialist in skin health to offer free consultations, and holding a raffle draw together with freebies distributed to women on this occasion.