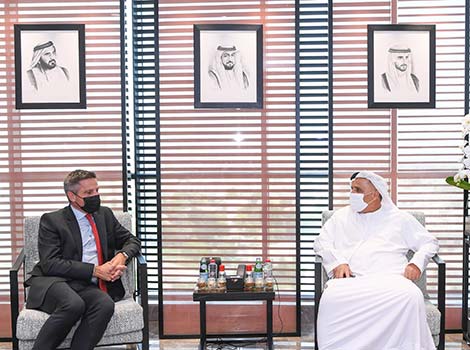 His Excellency Mattar Mohammed Al Tayer, Director-General, Chairman of the Board of Executive Directors of the Roads and Transport Authority (RTA), received UK Consul General to Dubai Simon Penney, and the accompanying delegation. The meeting discussed means of boosting cooperation and exchanging expertise between RTA and transport entities in the United Kingdom. The two parties also explored future RTA projects, especially those related to future mobility solutions.

Al Tayer congratulated the British Consul on his new position, wishing him success in his new role. He also praised the close relationships between the RTA and several British entities, universities and companies in the field of transport systems. Al Tayer expressed his aspirations for widening the cooperation as well as investment and commercial relations between the two sides in a variety of fields, especially in the operation of public transport buses and developing bus stations and shelters.

Mr. Penney expressed his delight with the participation of British entities and firms in delivering RTA’s projects and looked forward to seeing more cooperation and exchange of experiences in the interest of both parties.