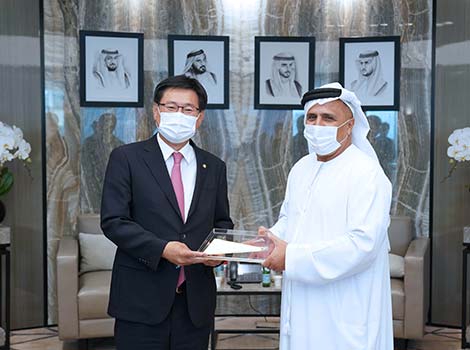 The meeting discussed means of boosting cooperation and exchanging expertise between RTA and its Korean counterpart in the fields of autonomous transport and control systems. The delegation reviewed RTA’s plans for the future development of these fields.

At the start of the meeting, Al Tayer welcomed the visitors and praised the cooperative relationships between RTA and several Korean entities operating in the fields of transport and transport systems. He briefed the visitors about Dubai Strategy for Self-Driving Transport that aims to convert 25% of total mobility journeys in Dubai into smart and autonomous journeys by 2030. He noted that RTA was finalising trial runs for the operation of the autonomous air taxi and autonomous taxis as well as the development of suspended mobility systems.

The Korean delegation viewed RTA’s plan for sustainable transport encompassing an array of projects and initiatives to enhance eco-friendly transport. The plan aims to transform the entire Dubai Taxis fleet into eco-friendly vehicles (hybrid and electric) by 2027, experiment the operation of the first hydrogen-powered taxi in the Middle East, and the trial run of the first batch of electric public buses. The delegation attended a briefing about Dubai’s Intelligent Transport Systems centre, which uses smart technology to manage traffic movement to meet the requirements of Dubai’s sustained growth such as the hosting of mega international events like Expo 2020.

The meeting discussed RTA’s efforts to commute visitors to Expo 2020. RTA has developed a comprehensive plan including routes for lifting visitors from key assembly points in Dubai and other emirates to the site of Expo. It also covers the operation of Route 2020 of Dubai Metro stretching 15 km from Jebel Ali Station to the site of Expo. It connects 7 stations and can lift 46,000 riders per hour in both directions. The plan also includes the deployment of taxis to serve expo visitors along with the required stands and streamlined movement.

His Excellency CHO, Eung Cheon praised the excellent partnership between RTA and its Korean counterpart, and expressed hope to see more cooperation and exchange of expertise in the interest of both parties.