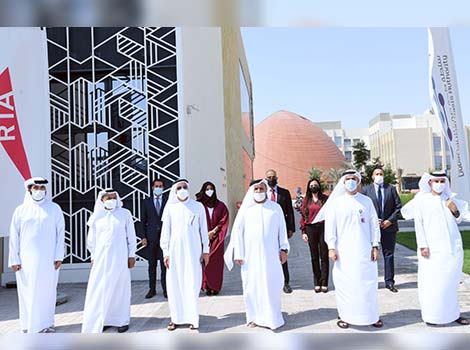 His Excellency Mattar Mohammed Al Tayer, Director General Chairman of the Board of Executive Directors of the Roads and Transport Authority (RTA) attended part of the final tests of leading companies and academic institutions that had qualified for the second cycle of the Dubai World Challenge for Self-Driving Transport. This edition is devoted for Self-Driving Logistics including ground transport means, and drones. Tests were conducted at Dubai Silicon Oasis in the presence of Dr. Mohammed Al Zarooni, Vice Chairman and CEO of Dubai Silicon Oasis Authority (DSOA).

RTA charted out several scenarios that included tests in the presence of fixed and moving obstacles, and virtual ones. Participants were evaluated based on three key elements: the first: safety, which included reliability, visibility handling , interaction with pedestrians, and speed control. The second element was usability, which included speed, cargo safety and understandable behavior. The third element was: the level of maturity and included passing the scenario and operator interaction, path planning, detection and prediction.

His Excellency Mattar Al Tayer, Director-General Chairman of the Board of Executive Directors of the Roads and Transport Authority expressed his pleasure at the great level of projects participating in the challenge and reaching an advanced stage in innovative technologies to provide self-driving logistics services. He stressed that the joint initiatives would open up broad horizons for the development of the logistics sector, through the use of autonomous ground transportation and drones.

“Holding the Dubai World Challenge for Self-Driving Transport is part of RTA’s efforts to support Dubai Strategy for Self-Driving Transport launched by His Highness Sheikh Mohammed bin Rashid Al Maktoum, Vice-President and Prime Minister of the UAE and Ruler of Dubai, aimed to transform 25% of total mobility journeys in Dubai into journeys aboard self-driving transport means by 2030,” said Al Tayer.

“This global competition aims to expand the use of driverless transport at all levels and encourage leading companies and research institutions in this particular field to tackle the existing mobility challenges, such as the first and last-mile, congestions, and the low public transport ridership. Self-driving transport has become a key pillar of RTA’s strategy, and we are determined to achieve our goals through a host of creative initiatives capable of making self-driving transport a reality on the ground in Dubai,” added Al Tayer.

“Designating Self-Driving Logistics Services as a theme for the second edition of the Dubai World Challenge for Self-Driving Transport stems from RTA’s endeavours to support the logistical sector in Dubai. Studies indicated that Dubai hosts about 6,000 shipping/forwarding companies. About 64,000 trucks of various sizes make about 306,000 trips per day, accounting for about 13% of the total daily mobility trips in Dubai. The dispatch of shipments in the first and last-mile across the city is amongst the key services that impact the economy in general. Therefore, it is anticipated that new operation models or innovative vehicles will be developed for delivering goods in the first and last-mile in the near future,” he noted.

For his part, His Excellency Dr. Mohammed Al Zarooni, Vice Chairman and CEO of Dubai Silicon Oasis Authority, said: “Dubai is a global test lab, open for the world to pilot advanced technology and fourth industrial revolution solutions, as well as innovative artificial intelligence and smart transport. Dubai Silicon Oasis, as a technology and knowledge hub that drives innovation among the five urban centres of the Dubai 2040 Urban Master Plan, serves as a proof of concept for smart and sustainable transport for the future of Dubai and the UAE – hence our collaboration with the Roads and Transport Authority in Dubai on the Dubai World Challenge for Self-Driving Transport.”

Dr Al Zarooni added: “DSOA’s and the wider Dubai Smart City Strategy embodies the vision of His Highness Sheikh Mohammed bin Rashid Al Maktoum, Vice President and Prime Minister of the UAE and Ruler of Dubai, to transform Dubai into the smartest city in the world. In this edition, the Dubai World Challenge for Self-Driving Transport focuses on self-driving logistics services, including ground transport and drones, strengthening Dubai’s status as a global hub for smart logistics services of the future.”