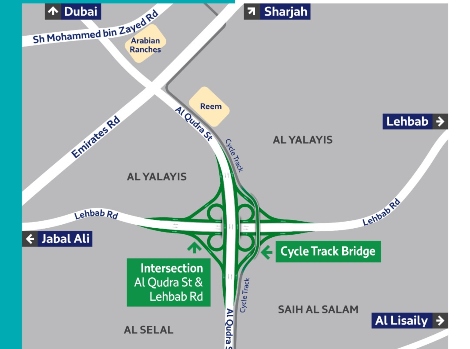 HE Mattar Al Tayer, Director-General and Chairman of the Board of Executive Directors of Roads and Transport Authority (RTA), confirmed that 65% of construction works of Al Qudra-Lehbab Roads Intersection Project had been completed. The project upgrades the junction from intersecting roads into a flyover enabling free traffic in all directions.

“Lehbab Road is a key traffic corridor offering an alternative link to Expo Road, JAFZA and Abu Dhabi-bound traffic and vice versa without going through downtown areas. Completion rate reached 70% in bridges and 90% in the cycling bridge. The entire project is set for full completion by the end of 2019 year,” revealed Al Tayer.

“The Project includes the construction of two bridges on the collector road as well as ramps to serve right, left and U-turns. The project works also cover widening connecting streets, and a cycling bridge in addition to lighting works, rainwater drainage systems, and utility lines.

“Widening of Al Qudra Road has provided a key passageway starting from Jumeirah to Umm Suqeim Street, which had also been improved by the construction of two bridges of three lanes in each direction. The first bridge passes over the Eastern Parallel Road (Al Asayel Street), and the second crosses over the Western Parallel Road (First Al Khail Road), enabling smooth traffic on the flyover of Al Khail Road and at the Interchange of the Arabian Ranches on the Sheikh Mohammed bin Zayed Road. It has eased the traffic to Al Qudra Road and further to Al Qudra Bridge crossing over Emirates Road up to Seih Assalam.

“RTA has undertaken improvements of Al Qudra Road over several phases starting with widening the road from one to three lanes in each direction over a 12 km stretch from the Lehbab intersection to Bab Al Shams R/A. Later on, roads improvements covered widening two bridges to three lanes in each direction and the construction of crossings for vehicles & camels. Works also included an 18-km cycling track fitted with a rest area comprising facilities and shops for bike rental and accessories, a fully equipped clinic, Cycling Gate, rest area, 10 shaded areas and bike racks.

“RTA has accomplished 10 projects under the Improvement of Lehbab and Expo Roads over a 55 km-long sector extending from Lehbab Police Station up to Sheikh Zayed Road. Improvement works included widening the road from two to four lanes in each direction and constructing a flyover at the 8th Interchange of the Sheikh Zayed Road comprising 24 bridges,” concluded Al Tayer.