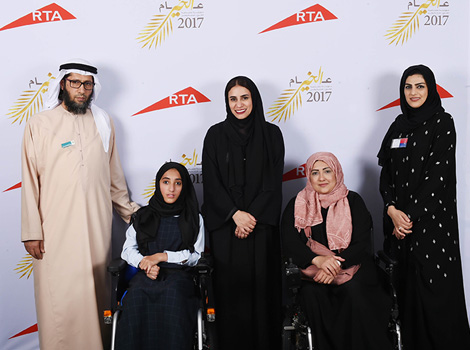 The Roads and Transport Authority (RTA) has received 10 people of determination at its headquarters and offered them 10 free wheelchairs. The gesture, which is made in coordination with the Dubai Health Authority (DHA), reflects RTA’s keenness to support the UAE’s ‘Year of Giving’ initiative, and supports the Dubai Government 'My community… A City for Everyone' initiative recently launched in the RTA. The move echoes the UAE & Dubai Government’s drive to make the practice of giving a sustainable corporate government culture.

The RTA accords utmost attention to the people of determination, screens their needs for comfortable living, and develops best initiatives and means for them to savour its services. It holds regular brainstorming sessions to upgrade the services on offer to people of determination, and always addresses their needs when designing its mobility projects & services. The RTA has configured all its transit means, be it public buses, metro, taxicabs, or marine transit modes, to enhance the accessibility to people of determination. It has also upgraded its website to make it accessible to these community members who can now browse it and submit service applications.