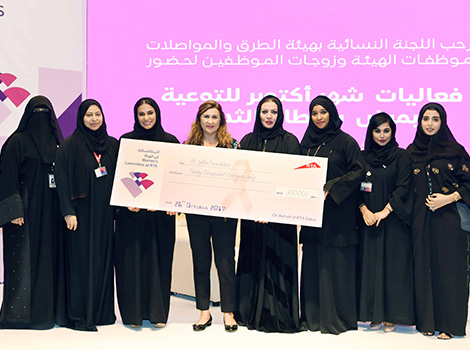 The Women Committee at the Roads and Transport Authority (RTA) has held an awareness-raising campaign about breast cancer in collaboration with Al Jalila Establishment marking the World Breast Cancer Awareness Day. The campaign targeted RTA female staff along with the wives of male employees, and focused on the importance of early detection of the disease as it assists the chances of prevention and treatment.

The RTA is keen on supporting communal, humanitarian, health, and cultural initiatives across the globe aimed at diffusing certain cultures amongst community members in general and women in particular. This  important educative campaign undertaken by various local and global entities, assists in the prevention of the onset of dangerous diseases, and propagating the awareness about the early detection of this dangerous disease as a first step for preventive and treatment.

This step is part of RTA’s strategy to reinforce prevention against cancer and holding several events in line with its objectives and the goals of the campaign. This included decorating the interior corridors of the RTA and the Women Committee and donning the logo of the campaign by female staff.

The events include a discussion panel hosting Dr. Hiba Al Zaydani (Gynecologist in Dubai) on the importance of early detection to get the best possible results.

It has also hosted Mrs. Ghadeer Kona, a survivor of breast cancer and a UAE Ambassador in raising the awareness about the disease. She spoke about her experience and gave constructive messages to RTA female employees highlighted by the continuous medical tests which requires continuous early detection. Breast cancer is not a hereditary disease and is  not related to a specific age group or restricted to women only, as men can catch it as well.

During the event free medical screening was offered to female employees and brochures were distributed to them focused on the  symptoms  and treatment methods as well as treatment and prevention techniques. Freebies  were  distributed along with testing gloves  provided  by the UAE Red Crescent.

At the  end of the event, RTA Women Committee made a cash donation amounting to AED 30000 in support of scientific research about breast cancer awareness, supporting patients and honouring speakers in the event.