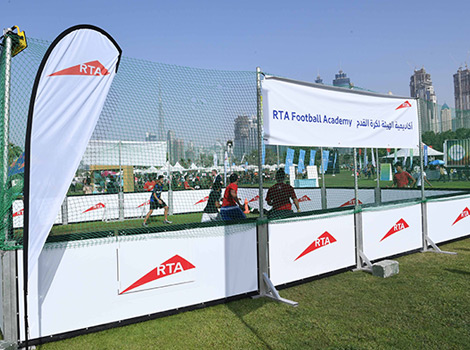 Ibrahim Al Haddad, Director of Commercial and Investment cum Head of Sports Team of RTA said: “RTA kick-started its participation in the ‘Dubai Fitness Challenge’ with outdoor events on Friday, October 20 and Saturday, October 21. These events were held in cooperation with governmental and semi-governmental organisations, business community and the general public in Dubai. RTA participated in Friday’s carnival activities in Safa Park, where specialised entities organised several sports events. On Saturday, RTA organised a fun running festivity for the public at the Dubai Water Canal area and participated in a carnival that included various activities at Safa Park. RTA also conducted a yoga session at sunset on Dubai Marina Walk on the same day.”

"RTA holds other various sports events in its Head Office, in addition to the head offices of the Public Transport Agency and Dubai Taxi Corporation. These events include InBody Analysis for men and women, stairs climbing challenge for men and women, drivers' football tournament and drivers' running tournament among other events that reflect RTA’s challenge spirit in Dubai Fitness Challenge Initiative,” concluded Ibrahim Al Haddad.