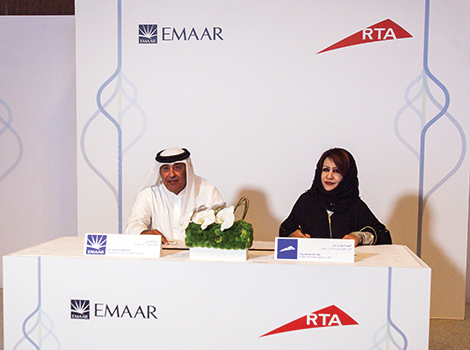 The Dubai Roads and Transport Authority (RTA) has signed a joint venture with Emaar Properties to study the launch of autonomous vehicles using smart traffic signals as crossings between the Dubai Mall and Boulevard areas. the agreement was signed on the sidelines of International Road Federation, IRF, Middle East and North Africa.

"The self-driving vehicles had brought new challenges and perceptions to our road infrastructure, which warrants upgrading the existing technology in an innovative manner to mark the world’s first autonomous vehicles initiative. The joint venture between RTA and Emaar is a fruitful outcome of the study of autonomous vehicles plying the Dubai Mall and the Boulevard areas using, in the initial phase, smart interactive systems between these vehicles and traffic signals on some intersections, controlled by signalized traffic lights, said Maitha bin Adai.

"This drive is expected to further boost Dubai's standing in the forefront of global cities in implementing clean transport solutions that contribute to achieving sustainable development. This is because innovation in the transportation sector & mobility solutions in the city is one of the key pillars of Dubai Smart Vision, launched by Dubai Government,” continued bin Adai.

Ahmed Thani Al Matrooshi, Managing Director, Emaar Properties, said: “We offer our sincere thanks to RTA for supporting our plans aimed to introduce and use autonomous vehicles in downtown Dubai. The joint venture is another conclusive testament reflecting Dubai’s commitment to promoting sustainable transport patterns consistent with the objective of the Dubai 2021 Plan to build a smart city.”

“Dubai is seeking to link the various landmarks Downtown Dubai, the world's most popular tourist and leisure destination, with autonomous vehicles to bring more comfort and convenience to the residents and visitors flocking to the stunning landmarks including Burj Khalifa, Dubai Mall, Dubai Opera, Souq Al Bahar, in addition to the top-class hotels. We are poised to incorporate this clean and smart initiative into our future mega-project, "Dubai Creek Port", in line with the Dubai's autonomous vehicles strategy launched recently,” said Ahmed Thani Al Matrooshi, Managing Director, Emaar Properties.