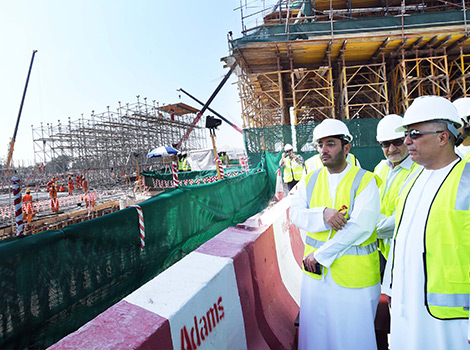 HE Mattar Al Tayer, Director-General and Chairman of the Board of Executive Directors of Roads and Transport Authority (RTA), announced that RTA would open the main bridge on Sheikh Khalifa bin Zayed Street January 2018. The Project is part of the Improvement of Sheikh Rashid-Sheikh Khalifa bin Zayed Streets Intersection Project. Al Tayer further revealed that RTA would open a tunnel linking Al Garhoud and Mina Rashid in both directions in the second quarter of 2018. He noted that the completion rate of the entire project had clocked 70%.

The Project is part of RTA’s masterplan for the improvement of roads, bridges, crossings and underpasses to accommodate the growing traffic volumes, and ease the traffic movement in all parts of Dubai. It is also part of the overall efforts to implement RTA’s strategic plan for upgrading roads and transport infrastructure in Dubai. The objective is to develop integrated solutions of roads and marine network that is safe for users, capable of matching to the development plans and demographic growth, and encouraging the development and investment in the Emirate.

“The Project includes the construction of a bridge on Sheikh Khalifa bin Zayed Street, a tunnel on Sheikh Rashid Street, and a bridge on Zabeel Street in the direction of Sheikh Rashid Street. The objective of such works is to ensure a free traffic movement from the Trade Center R/A to the intersection of Sheikh Khalifa bin Zayed Street and Al Kuwait Street through a two-lane bridge in each direction,” noted Al Tayer.

“The project also entails the construction of a tunnel of four lanes in each direction on the Sheikh Rashid Street in the direction of the intersection with Al Mankhool Street, and a signalised junction under the bridge to provide free turns from main roads to subsidiary roads. The bridge has a one-directional ramp stretching from Umm Hrer Street to Sheikh Rashid Street. It also includes lighting, pavement, irrigation, sewage, storm-water drainage works as well as the shifting of utility lines such as electricity, water and telecommunication,” added Al Tayer.

The construction of Sheikh Rashid-Sheikh Khalifa bin Zayed Streets Intersection Project is concurrent with the opening of the Improvement of Wafi Intersection Project in April 2016. Wafi Intersection is considered one of the vital junctions in Dubai intersecting with Sheikh Rashid Street and Oud Metha Street. It encompassed the construction of a three-lane bridge from Oud Metha Street (near Latifa Hospital) in the direction of Sheikh Rashid Street, and from there to Sheikh Zayed Road and Al Sa’ada Street (Upper Deck leading to the Dubai World Trade Center). The Bridge extends 700 meters and can accommodate 3300 vehicles per hour.