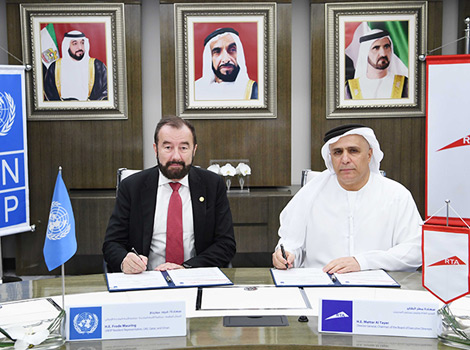 The Roads and Transport Authority (RTA) has signed a Memorandum of Understanding (MoU) with the United Nations Development Programme (UNDP) to enhance the cooperation between the two entities. The MoU provides for holding workshops on the sidelines of the Dubai International Projects Management Forum focusing on humanitarian and development projects.

HE Mattar Al Tayer, Director-General and Chairman of the Board of Executive Directors of RTA signed the MoU on behalf of RTA, and HE Frode Mauring, UNDP Resident Representative to the United Arab Emirates, signed it on behalf of the UNDP.

Al Tayer was delighted with the signing of the MoU with the UNDP as it concurs with the announcement of HH Sheikh Khalifa bin Zayed Al Nahyan, President of the UAE, declaring 2017 as The Year of Giving in the UAE. It also reflects the noble values of the UAE community, which gives much weight to the social responsibility and the spirit of collaboration with community members.

“As part of its initiatives marking The Year of Giving, RTA has launched the ‘RTA Foundation’ with the aim of delivering charitable services and non-profit seeking social initiatives offering transit means to specific individuals or bodies. In coordination between RTA, government bodies and the private sector, the Foundation will seek to enhance charitable projects related to public transport in underdeveloped and disadvantaged countries to bring about a positive impact on the standard of living in those countries.

HE Frode Mauring will take part in the discussion panel headlined: Development Project Management on the second day of the Dubai International Projects Management Forum (DIPMF) 2017. Participants in the session include HE Saeed Al Tayer, CEO and Managing Director of Dubai Electricity and Water Authority (DEWA), and HE Mohammed Al Hammadi, CEO of Emirates Nuclear Energy Corporation. Discussions will cover the role of development projects in leveraging the development and prosperity of countries along with some examples in this regard.