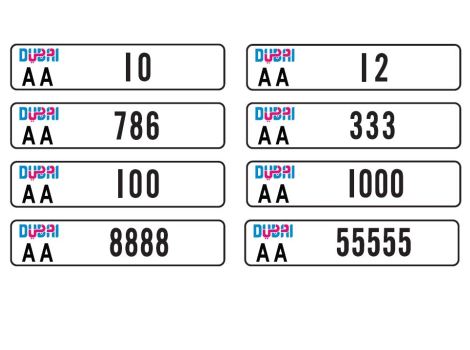 HE Mattar Al Tayer, Director-General and Chairman of the Board of Executive Directors of Roads and Transport Authority (RTA) has unveiled a new generation of vehicles licensing plates design as well as a new two-code plate as of December 2017. The first lot of the new distinctive dual code plates will be released in an open auction to be held on Saturday December 9th at Westin Hotel (Habtoor City). This package includes 10 distinctive single, dual, triple, quadruple and Penta digit plates of Code AA namely:10, 12, 100, 333, 786, 1000, 8888 and 55555. The dual code plates will be released only through Open Auctions. RTA will plan the release of these numbers through the upcoming auctions and make announcements through various media and communication channels.

“This new initiative underlines RTA’s keenness to satisfy the needs of customers aspiring to own distinctive number plates, especially as the stock of single-code distinctive plates is about to be exhausted,” said Al Tayer.

“The new design of vehicle number plates is clear and easy to read from a distance. It is composed of three elements: The word Dubai (Brand), Number and Code. RTA would start replacing the existing plates of light vehicles by the newly designed plates as of Feb 2018. The replacement will be gradual and in lots according to a time chart to be announced in future. Clients interested in the (Regular) Plate bearing Dubai Brand in Black Colour, would have their vehicle plates replaced at cost of AED35 for short plates and AED50 for long plates. Others opting for the colored Dubai Brand Plate need to pay a fee of AED400,” explained Al Tayer.