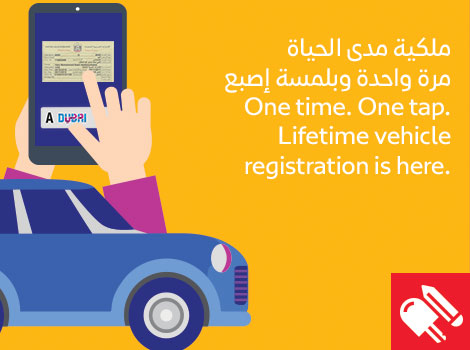 The Roads and Transport Authority (RTA) is set to issue lifetime one-time electronic vehicle registration cards, instead of the existing ones. The process will be rolled out in three stages starting in January 2018 and ending in September of the same year. The step is part of RTA’s electronic transformation drive; which is gradually being introduced to all services. It echoes the policy of the Smart City initiative as well as RTA’s third strategic goal People Happiness.

Abdullah Yousef Al Ali, CEO of Licensing Agency at RTA, said: “The new electronic vehicle registration card aims to delight customers through saving their time and efforts by issuing cards using smart methods. Customers can avail this service through installing RTA-DUBAI or DUBAI DRIVE apps on smartphones. In the initial stage, which starts in January 2018, the service will be available for government organisations, car rentals offices and taxis. The second stage will be launched in September 2018 and offer the service to private companies, and the third stage will kick in September 2018 and offer the service to individuals,” he said.

“The RTA has charted out the practical steps for the e-transformation of vehicle registration cards through sending letters and holding workshops for the concerned parties/segments. It will issue lifetime one-time electronic cards, with no expiry dates, and renew the electronic registration every year upon the completion of the applicable procedures as shown in RTA’s apps. The project will be a valuable addition to the Smart City initiative. It also forms part of environmentally friendly products as it reduces the use of environmentally damaging materials, such as polyethene and its plastic derivatives,” he added.

“The RTA is always keen on keeping pace with the government directives, especially as regards providing comfort and happiness to customers. Such considerations rank high among RTA’s top strategies, and its service deliverables,’’ concluded the CEO of RTA Licensing Agency.