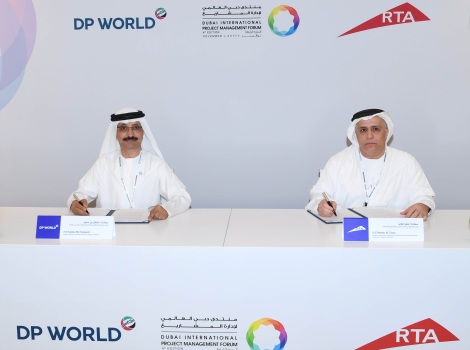 The Roads and Transport Authority (RTA) has signed two Memoranda of Understanding (MoU) with DP World and Projects Management Institute (PMI) whereby the two entities will continue their roles as co-organizers of the Dubai International Projects Management Forum (DIPMF) over the period 2017-2019. The signing of the MoU culminates the enormous successes achieved over the past four editions of the Forum. The latest round witnessed the felicitation of winners of the inaugural Hamdan bin Mohammed Award for Innovation in Projects Management.

HE Mattar Al Tayer, Director-General and Chairman of the Board of Executive Directors of RTA, signed the MoU on behalf of RTA whereas HE Sultan Ahmed bin Sulayem, Chairman and CEO of DP World, and HE Mark Langley, Chairman and CEO of PMI signed for their respective organisations.

Al Tayer was delighted with the signing of the two MoUs with DP World and PMI to continue their partnership in co-organizing the Forum held under the patronage of HH Sheikh Hamdan bin Mohammed bin Rashid Al Maktoum, Dubai Crown Prince and Chairman of the Executive Council. “The partnership contributes to realizing the objectives of the Forum in showcasing the leading development model of Dubai under the leadership of HH Sheikh Mohammed bin Rashid Al Maktoum, Vice-President and Prime Minister of the UAE, and Ruler of Dubai,” said Al Tayer.

“Dubai is considered amongst the foremost global cities in the field of PM and adopts the highest international standards in delivering mega projects such as Burj Khalifa, The Palm Jumeirah, Dubai Metro, Dubai Tram, airport projects and an array of iconic architectural schemes. It is set to apply the deliverables of the Forum in future projects in Dubai, especially those related to Expo 2020; the biggest and oldest global showpiece. Studies indicate that Expo 2020 will attract during its six-month period about 25 million visitors, 70% of them will be coming from abroad, and create about 277 thousand jobs.

“The Forum has cemented its profile over the past four editions to shape into a global platform for rolling out top practices and come up with creative solutions in the field of PM, thanks to the participation of visionary international experts unleashing ideas contributing to the successful delivery of mega projects. Over the past four editions of the event, more than 6000 delegates from 50 countries took part in the Forums. Topics discussed included the application of PM in engineering and construction projects as well as in technical, sports, energy, sustainability, anticipating the future, innovation and more. Successes of the Forum culminated in the launch of the Hamdan bin Mohammed Award for Innovation in Projects Management, and honoring the winners of the inaugural Award in the fourth edition of the Forum,” explained Al Tayer.

HE Sultan Ahmed bin Sulayem, Chairman and CEO of DP World said, “We are proud of the unique partnership with the RTA in co-organizing the DIPMF Over a short period, the event had firmly established itself as a global platform bringing together top development experts and specialists; enabling the transfer of knowledge and expertise.

“DP World is committed to promoting Dubai city all over the globe through acting as a source of knowledge and applying our experiences and knowledge across the portfolio of our business spanning 78 land and marine stations in 40 countries. This event offers a chance to highlight Dubai development models and share the best practices in applying innovation in the construction of pioneering and sustainable infrastructural projects. Such projects add to the economic diversification efforts, especially in trade, logistics and transport. This drive matches the leadership strategy and vision that has yielded large projects in Dubai such as Jebel Ali Port, JAFZA, The Palm Islands, Burj Khalifa and others. Thanks to the directives and close follow-up of HH Sheikh Mohammed bin Rashid Al Maktoum, Vice-President and Prime Minister of the UAE, and Ruler of Dubai, these projects have become today among the key pillars of the economic diversity policy,” added Bin Sulayem.

Mark A. Langley, Chairman and CEO of PMI, was delighted to renew the strategic cooperative agreement between PMI and RTA for the implementation of the annual DIPMF. He said, “PMI is honored to continue the strong relationship we have built with RTA throughout the past three years.”

“As one of the most influential organizations in the Middle East, RTA provides critical insight for PMI as one of the 80 elite members of PMI’s Global Executive Council. PMI delivers value for more than 3 million professionals who are working in nearly every country in the world – through advocacy, collaboration, education, research and more.

“To help promote PM as the organisational capability that connects ideas to reality, PMI appreciates the opportunity to participate in DIPMF, the largest platform in the Middle East for PM knowledge exchange, innovation and leader insights. Throughout active participation in DIPMF, PMI continues to help governments and organizations around the globe recognise the critical value of PM to success and better performance,” he added.