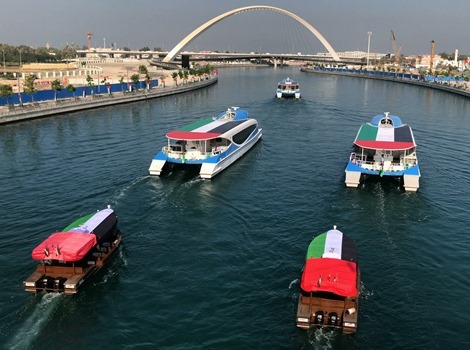 The Roads and Transport Authority (RTA) on Thursday, November 2, has taken part in the celebrations marking the UAE’s Flag Day, in an annual response to the national initiative launched in 2012 by His Highness Sheikh Mohammed bin Rashid Al Maktoum, Vice President and Prime Minister of the UAE and Ruler of Dubai.

HE Mattar Al Tayer, Director-General and Chairman of the Board of Executive Directors of the Roads and Transport Authority (RTA), hoisted the UAE’s flag on the RTA’s Head Office, in the presence of the RTA’s CEOs, directors and staff members. Al Tayer beamed with pride on this occasion, which translates the rock-solid cohesion enjoyed by Emirati people, thus epitomizing the sense of belonging to their beloved country and its and allegiance to their wise leadership. Our leadership has laid down the pillars of the modern UAE, thus becoming a source of pride, setting an example to be emulated among nations in development, unity, advancement, with all Emiratis reciprocating their leader's love.

The Dubai Roads and Transport Authority (RTA) pointed out that this year's national celebrations agenda included Dubai Water Canal, representing the most recent iconic project in Dubai. The Canal has been decorated with the UAE’s flags, in addition to decorative lighting shaping the four colours of the UAE’s flag installed on one of its bridges. A water march has been organized where 8 abras and 3 boats of Ferry Dubai were adorned with the UAE’s flags. The RTA’s Head Office has also been spruced up, as well as 46 taxis serving Dubai Airport. Decoration works will continue until the 46th National Day celebrations in December.

“The "Flag Day" events also included a film showcasing the keenness of the RTA’s employees to participate in this valuable occasion through the RTA’s social media. As many as 5,000 handbooks were distributed at bus stations, Dubai Airport and metro stations to raise people’s awareness about how to handle the UAE’s flag in this joyous festivity. The flag is a symbol of our country, which warrants observing civilized behaviour when celebrating or expressing joy for this national occasion,” concluded the Director-General and Chairman of the Board of Executive Directors of the RTA