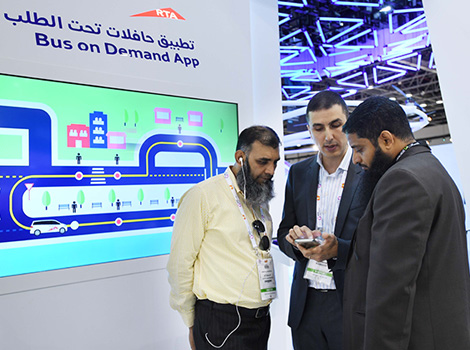 Through its stand in Gitex 2017, the Roads and Transport Authority (RTA) has unveiled an bus on-demand service via a smart app branded (MVMANT), the first app of its kind in the region. The service enables customers to order a bus to take them from homes to their intended destinations. The launch of this app is part of RTA’s efforts to keep pace with the Smart City initiative and the Dubai Future Accelerators unleashed by the Dubai Government.

Abdullah Yousef Al Ali, CEO of RTA’s Public Transport Agency, RTA, said, “This innovative project is undertaken in the context of the Dubai Future Accelerators Programme and the Smart City initiative advocated by our Government. The trial run of this project is set to start by the end of this month, and the smart service would enable individuals to order a bus to take them to their destination. This on-demand service is offered via a smart app called (MVMANT), the name of an Italian-German Company teaming up with RTA in running this service. Bus drivers would be able to communicate with clients via the app to reach the nearest point to them.”

“During the trial phase, this on-demand bus service will be run by six buses deployed at Al Barsha and Al Warqaa. A questionnaire would be conducted at metro stations for residents of these two districts to screen their needs, preferences and views about the service before being activated. This step aims to ensure that the service offering would live up to the aspirations of the targeted clientele for a convenient and safe mobility,” added Al Ali.

“The offering of on-demand bus service through MVMANT app is part of the Artificial Intelligence techniques the RTA is considering to adopt and is an integral part of its key strategic goals. Preparations are underway for selecting a platform for flexible routing and scheduling of buses to enable customers to avail this innovative service.