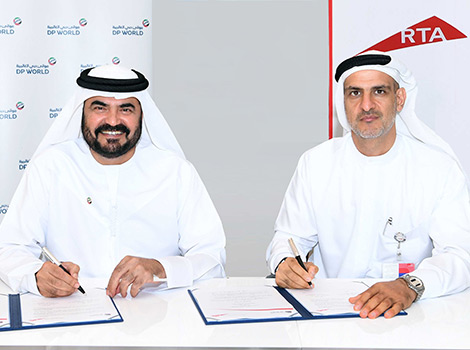 The Roads and Transport Authority (RTA) has sign an agreement with DP World – UAE Region for assisting in issuing driver permits and offering licensing services. The Agreement is part of RTA’s efforts to enhance the integration and coordination with public entities in Dubai and realise the vision of the Government in this regard.

According to the Agreement, RTA undertakes to issue driving learning permits, renew driver permits and issue permits for instructors handling jobs of special nature. RTA is committed to granting employees of DP World access to the SDDI system, offer them the training & technical support required to operate the system at the premises of DP World. RTA shall also audit transactions relating to permits of special nature jobs, receive transactions entered online for reviewing, endorsing and printing them before forwarding the information to the service applicant, among others.

The Agreement obliges the DP World to use driving permits for special jobs (light & heavy machinery), use SDDI system in processing the services provided for therein and complying with the customer service standards set by RTA.

The signing of this Agreement is part of Dubai’s endeavours to enhance its transformation into a smart and pioneering city in all respects. It also cements the global competitiveness of our nation, which echoes the vision of our leadership to rank the UAE as the world’s best in all respects by 2021.

The Agreement depicts the spirit of cooperation between RTA and other government/semi-government entities in serving the supreme interests of Dubai and realising its strategic vision in bolstering the relationships with various entities in the city. The Agreement is bound to bring back a host of service benefits to both parties.