Workshop about etiquette of dealing with people of determination 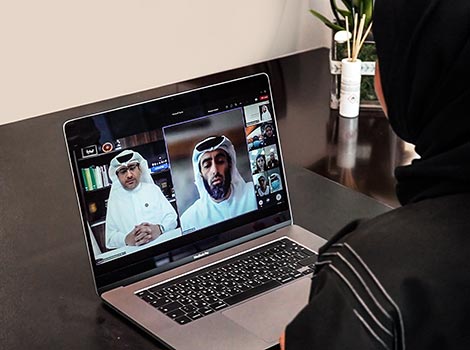 Dubai’s Roads and Transport Authority (RTA) has held a virtual workshop about the etiquette of dealing with people of determination attended by His Excellency Majid Nasir Al Osaimi, Executive Director of the Dubai Club For People Of Determination, and Mansour Al Falasi, Chairperson of RTA Foundation cum CEO of Dubai Taxi Corporation. The workshop, which was held in the context of the cooperative links between RTA and Dubai Club for People Of Determination, aimed to support the people of determination in line with the Dubai Government initiative “My Community ... A City for Everyone”. About 300 staff of RTA attended the event.

“RTA has accomplished the initial phase of rehabilitating its buildings and facilities to make them compatible with the provisions of the Dubai Universal Design Code for People of Determination. It encompassed rehabilitating RTA’s Head Office, customer happiness centres at Umm Ramool as well as other key areas of the emirate. It also covered multi-level car parks, braille signboards, toilets and counters dedicated for use by people with mobility challenges, audio enhancers, and a microphone for the reception staff to communicate with people with hearing challenges in the event of direct inquiries. RTA had also provided stations for charging electric wheelchairs in several bus stations to serve people of determination,” he added.

His Excellency Majid Nasir Al Osaimi, Executive Director of Dubai Club For People Of Determination, said: “Although the culture of respect and kind treatment of others is embedded in the local community, an array of variables together with the entry of people of determination into the labour market in various capacities, always prompts us to show support and encouragement to employees and clients from the people of determination from various entities across the UAE.

“Accordingly, we have prepared for holding “The Art of Dealing with People of Determination Workshop” in cooperation with the RTA to raise the awareness of employees to be familiar with the basics of dealing with people of determination of all categories, be it a visual, hearing, movement or mental disability. RTA has a group of talented employees from people of determination who need to establish constructive communication with their colleagues in different departments. Therefore, the workshop highlighted the situations that employees have to observe when dealing with his colleague from the People of Determination, which will, in turn, contribute to the interest of agencies affiliated to RTA,” added Al Osaimi.