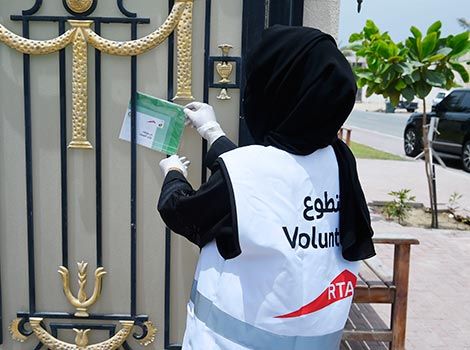 Dubai’s Roads and Transport Authority (RTA) announced that 41,210 individuals and families (20,810 individuals and 20,400 families) amongst categories operating in the first defence line against the coronavirus (Covid-19) had benefitted from RTA’s charitable initiatives in Ramadan. Beneficiaries included senior Emiratis, senior residents, drivers, female drivers and families of employees. This initiative, which had been on the go for several years, translates RTA’s commitment to boosting its social responsibility.

“RTA’s Meals on Wheel’s initiative that was carried out for nine years in a row was designated this year to the first defence line against the coronavirus. The initiative distributed Iftar meals to 13,500 cleaners and security personnel at Latifa and Rashid Hospitals and the Dubai Corporation for Ambulance Services. The initiative was run in collaboration with Serco, Dubai Metro and Tram Operator, in collaboration with Talabat the online food and household delivery platform,” said Ms, Rowdah Al Mehrizi, Director of Marketing and Corporate Communication, Corporate Administrative Support Services Sector, RTA.

“RTA also supported the national ‘10m Meals Campaign’ by allocating 30 taxis to deliver food baskets to 20 thousand fixed-income families in collaboration with the International Humanitarian and Charity Organization. Meanwhile, RTA Women’s Committee teamed with Dubai Taxi Corporation (DTC) in distributing Ramadan Rations to 210 female taxi drivers, which were offered  in the form of  topped up nol cards that that could be used for purchases. ,” added Al Mehrizi.

“In the meantime, DTC delivered 4,800 daily iftar meals to the accommodation of taxi drivers at Al Muhaisnah, Al Quoz and Jabal Ali. They also distributed food baskets to 200 resident families of drivers. About 500 of senior Emiratis in Dubai and Hatta benefited from the support provided on Zayed Humanitarian Day through credits in nol cards distributed to them in coordination with the Community Development Authority,” she continued.

Al Mehrizi praised the efforts of RTA volunteers in delivering these initiatives. “Our volunteers supervised the distribution of meals to those in the first defence line, and nol cards to senior Emiratis in several areas despite the fasting and the outbreak of the virus. They were driven by humanitarian duties and an inherent perception of the importance of charitable activities. They were educated about the need to observe physical distancing and avoid contacting, and were supplied with all preventive equipment while doing their duties for their safety and the safety of beneficiaries,” she noted.

“RTA is always keen to boost its social responsibility through year-round activities, especially in Ramadan. At the same time, it seeks to make an effective response to the directives of leaders to make Dubai a charitable and humanitarian hub for all citizens and residents as well as the needy in the community,” concluded Al Mehrizi.